Garry Unger will always be remembered in St. Louis Blues annals as the flashy, flamboyant, freewheeling skating dervish who provided fans with almost a decade of excitement while wearing the bluenote.

Garry Douglas “Iron Man” Unger played 16 seasons in the National Hockey League, setting an NHL record by playing 914 consecutive games in the regular season between February 24, 1968, and December 21, 1979, while playing for four teams: the Toronto Maple Leafs, Detroit Red Wings, the Blues and Atlanta Flames. His record has since been surpassed by Doug Jarvis, who played 964 consecutive games. Unger tallied nine 30-plus-goal seasons during the 1970s and finished with 1105 career NHL games, scoring 413 goals and 391 assists for 804 points. He also registered 1075 career penalty minutes.Given the often-brutal nature of hockey, many fans might argue that being an iron man in the NHL may be a greater accomplishment than in any sport. Unger, who played for the Blues for eight seasons, certainly deserves recognition as one of professional hockey’s – if not in any major sport’s – all-time great iron men.

The Calgary-born Unger came to the Blues from Detroit for popular Red Berenson in a trade of high- scoring center icemen. Unger had already established himself as one of hockey’s top scorers before coming to St. Louis. During the 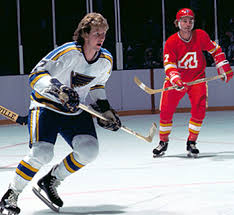 1969-70 season, Unger popped in 42 goals. During his eight years with the Blues, Unger would prove to be one of the more resilient players in the history of the National Hockey League. He played 662 games in a row for the Blues, and scored at least 30 goals per season during his time on their roster. Six of those seasons saw him leading his team in goals scored. He remains to this day fourth on the list of Blues scorers.

Still, the most memorable record that he set with the team came when he broke Andy Hebenton’s 630-straight game record. By the time Unger’s streak of consecutive games ended, he had pushed that record to an incredible 914 games.

Unger’s streak was not a matter of being fortunate enough to be completely healthy throughout his career. In fact, he suffered many minor injuries, aches, and pains, and admitted later that he probably should have rested at times rather than playing. He was able to keep his pain in perspective, however, by always remembering the peace that he saw in the eyes of his sister, who suffered from polio and, as a result, couldn’t walk. Knowing that she was strong enough to find happiness in her life despite that setback gave Unger the inspiration he needed to become the Iron Man fans now remember.

Perhaps Unger’s finest season with the Blues was the 1972-73 season when he cored 41 goals and added 39 assists for 80 points. He also racked up 119 penalty minutes that year, second most in his career. He finished his NHL career playing in four Stanley Cup Finals and four All-Star games. Unger then entered the coaching ranks leading teams in the International, Central and Western hockey leagues. He coached Tulsa to a championship in 1992-93.