When Fed Rakers retired as coach at Breese Mater Dei High School in 2010, he was the second winningest volleyball coach in Illinois high school history behind Wheaton St. Francis coach, Peg Kopec.  “It was a great ride,” said Rakers, who passed away in November 2013 at the age of 68. And it was.

Three weeks before retiring, Rakers won his sixth state title when Mater Dei captured the Class 3A state final. He had a career record of 1,046-200-7, all at Mater Dei, including 41-1 in his last season. In addition to his six state titles, Rakers’ teams finished second (once), third (four times) and fourth (three times) in 20 state appearances.  He also won four district titles, 24 regional championships, 21 sectional titles and 20 super-sectional championships.

“I couldn’t have had all these numbers and been all the places I’ve been without having good kids,” Rakers said upon retiring. “None of that stuff (winning titles) is important. To me, it’s the kids that are important.” 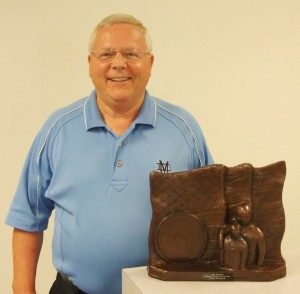 Fred was a walking billboard for Mater Dei, wearing Mater Dei shirts wherever he went.  He announced at football games, sold ads for the Christmas Tournament, attended Fathers and Friends meetings, assisted with the annual Fund Drive, sold Mater Dei calendars to everyone he knew, attended class reunions, and worked and played in golf tournaments.

He enjoyed being on the go and watching sports as a fan of everything St. Louis: The Cardinals, Blues, and Rams, as well as local Mater Dei games and grade school volleyball matches throughout Clinton County.  After stepping down as head coach of the Mater Dei program following the 2010 season, Fred continued to coach for Club Crush and assisted with volleyball camps. He loved being around people and would do anything for anybody.

A veteran of the United States Air Force Reserves, he was instrumental in starting and coaching many sports teams for kids in Aviston, especially the girls’ basketball and soccer leagues.  Upon Fred’s retirement, his son Chad was named the new Mater Dei coach. Fred had let Chad do a lot of coaching during his last season.