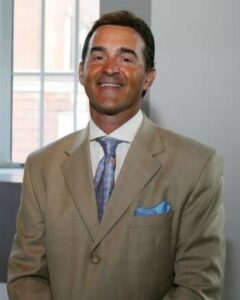 It’s hard to say exactly when Frank Cusumano was first bitten by the sports bug – but it’s safe to say it was in his blood by the time he was six, when he went with his dad to see Bob Gibson’s 17-strikeout game in the 1968 World Series.

Frank grew up in the CYC, where basketball took a firm grip on him.  By high school he was a DeSmet Spartan and was a part of an historic run.  Led by fellow Hall of Famer Steve Stipanovich, the Spartans won an astounding 63 games in a row, including the 1979 Missouri state championship.

From there it was on to UMSL, where Frank played four years for the Rivermen.  He wrote a reflective ode to his career that ran in the Post-Dispatch.  Only Frank could describe the aftermath of a made jump shot as “the best three seconds in life, the distillation and the quintessence of the game.”

But it was on to the next chapter in his life.  Frank started his broadcasting career in Kingsport, TN and then Lexington, KY.  There, he covered sports passionately, but he always had his eye on coming back to St. Louis, where he could “live sports.”  And after six years, he was hired by KSDK.

After a first week on the job where he covered coaches Bob Knight and Mike Krzyzewski appearing in the area, he hasn’t slowed down.  Television reporting alone couldn’t feed his passion, so he soon added sports talk radio to his schedule.  He’s even contributed to various print outlets in town from time to time, as well as play-by-play and sideline reporting for the Rams and Saint Louis U.

Frank has represented St. Louis in big event settings, from World Series-winning locker rooms and a confetti-littered field at Super Bowls to victory parades, and news conferences such as ones that brought the Rams to St. Louis and subsequently took them away.  But where Frank has been at his best is in profiling people; ones you think you knew and those you’re glad he introduced you to.

At Frank’s essence is his hometown, always finding a way to make St. Louis and its people and fans front and center.  That has extended from pro athletes to up-and-comers who have gone on to become stars, and those that may not be millionaires but shine like diamonds for what they do in their own way.

That includes his family.  He has never referred to his wife as anything but “the lovely Monique,” and he’s passed on his love for all things sports to Alex, Brooke, and Dom.  While his kids have not followed in his footsteps it wasn’t for lack of trying.  For years, Frank treated KSDK viewers to sportscasts on Christmas Day featuring the next Cusumano generation.

Those of us who have had any contact with him, directly or indirectly, can only hope to live their lives with as much passion as Frank Cusumano.