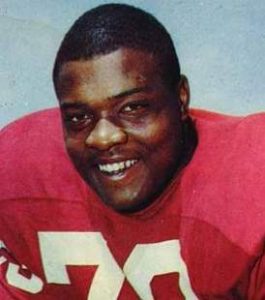 Ernie McMillan grew up in Chicago with two competitive brothers and learned early on that hard work was the key to achieving his goals. At DuSable High School he excelled in both football and basket- ball, playing on the storied team that was inducted into the NCAA Hall of Champions in 2003. Ernie then went on to play football at the University of Illinois.

In 1961, he was drafted in the 13th round by the St Louis Cardinals where he played 14 seasons as  an offensive tackle with the Cardinals and one with the Green Bay Packers. He was a Pro Bowl selection four times during his career. Ernie did not miss a game due to injuries during his first 12 seasons.

Always a team leader, he was voted most valuable player by both teammates and Old Pros Club in 1972. He was awarded South Shores Quarterback Club’s Johnny Unitas Award which is presented annually to a player who has come into pro football unheralded and becomes a top performer.

Ernie was a superb pass blocker. One season his coaches graded him an astounding 96 percent on pass blocking – 415 successful blocks in 430 attempts. To hear him describe his technique is much like a lesson in applied geometry. He used phrases such as center of gravity, accurate angles, and body control. When those were transferred into action on the field, the results were nearly perfect. One opponent called McMillan “one of the best. You can’t get rid of him … it is like he is wallpapered to your uniform.”

Ernie was a selfless player. Dan Dierdorf tells the story of when Coach Jim Hanifan came to Ernie and asked him to move from right tackle (a position he had held for a decade) to left tackle so that Dierdorf would have a chance to be a better player. He moved without hesitance and Dierdorf was eternally grateful.

Ernie was a “pro’s pro.” He always had a level of integrity that he lived and played by. He taught that there is a right way and a wrong way to go through life. He always did it the right way. He served many years as the team captain where he led by example. He led and others followed.

Throughout his playing career he worked with youth programs, whether it was coaching his son’s team or working with local  high schools and Little Leagues. During five years that he assisted at Sumner High School, it won two state championships. He continues to work with Junior Football in Kirkwood, helping young players to develop proper technique commitment, strong work ethic, and a winning attitude, all qualities that helped him be the successful player that he was.

In the words of his son, Erik, “My father has always been there for me on every level as a mentor, teacher and friend. He taught me to always follow through, to never quit, and always give my best effort. Then, at the end of the day, I could always feel good about myself.” And that is the way Ernie has always lived his life. Ernie and his wife Gail have been married 36 years and are the proud parents of Erik, former New York Jets defensive back, and Amber, teacher, marathon runner and yoga enthusiast.    (From the Missouri State Hall of Fame, 2014)