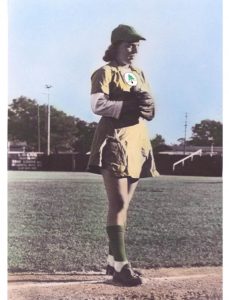 Two baseball movies, “For the Love of the Game” and “A League of Their Own,” pretty much describe the life of St. Louis native Erma Bergmann. Erma grew up loving and playing softball with her two brothers and other neighborhood kids at several St. Louis parks (sometimes on cinder lots) until she was “discovered” at age 14 and was asked to play organized amateur softball. By the age of 19, after graduating from McKinley High School, she was considered one of the areas best softball players and was asked to try out professionally for the All American Girls Baseball League (AAGPBL) — the league made famous by the 1992 movie “A League of Their Own,” which was a fictionalized account of the real-life AAGPBL.

“Bergie” was featured in a newspaper story headlined, “Girl Star Who Shines at a Man’s Game.” A photo showed the 15-year-old Bergmann as pitcher for the Phantoms, a boys’ baseball team, taking a full windup, her left foot up shoulder high. The caption said she had pitched 10 straight victories. Another photo showed her wielding a bat and described her as one of the team’s leading hitters. The article read, “Her fastball, which isn’t by any means what you’d expect from a girl, often goes right on by her catcher.”

A scout from the newly organized All-American Girls Professional Baseball League originally approached her in 1944. She turned down his offer to join the league because the manager of the softball park told her that if she didn’t make the team, she would be barred from playing softball for two years. “He didn’t want to lose me,” she explained. “And I liked the softball park—the seats, the lights, the popcorn, the fans.” The next year, an AAGPBL scout recruited her again before spring training in Pascagoula, Miss. Although she wondered where she would sleep and what she would eat, she decided to take the chance. She told her mother, “If this doesn’t turn out to be what he says it is, I’ll be right back on the first bus or train.”

Bergmann tried out for third base, the position she played in softball, and was selected to play for the Muskegon Lassies as an outfielder in 1946. She quickly switched to pitching. “I had a strong arm, I just had to get it over the plate,” she said. “I couldn’t get it over underhand, which was the rule in softball, but I could sidearm. It was called submarine pitching—close to your knee.”

Bergmann played from 1946-1951, pitching for the Muskegon Lassies (1946-47), Springfield Sallies (1948), Racine Belles (1949-50) and Battle Creek Belles (1951). She hurled a no-hitter against the Grand Rapids Chicks on May 22, 1947, which she calls “the highlight of my career.” But Erma also said she enjoyed other things about the league: “Playing with some of the best players in the U.S. and Canada. Spring training in Cuba. Travel. Education. Getting paid for something you loved to do. This was a stepping stone of my life. Everything was above what I expected and above what I had. I loved the traveling; I loved the people I met. It was a big thrill,” she said. Bergmann was paid $75 a week in 1946 plus $3.50 meal money per day, a dramatic increase from her $18 a week stenographer’s salary. “We were paid the same as men’s AAA minor league players,” she said.

After baseball ended in 1951, Bergmann returned to St. Louis and became one of the first pioneer policewomen in 1956. Bergmann retired after 25 years of honorable service in the St. Louis Police Department.

When Erma compared her experience in the AAGPBL with the way the league was portrayed in “A League of Their Own,” she made an instant hit with the audience by commenting, “I never had a manager as drunk as Tom Hanks.”

(Excerpts from “In a League of Her Own” By Patricia A. Tracy)