Before retiring from the San Francisco 49ers at age 31, Eric Cortez Wright was one of the most highly touted cornerbacks in the National Football League.

A 1977 East St. Louis Assumption graduate and four-time Super Bowl champion, Wright went to the University of Missouri where he played three years for coach Warren Powers. A two-time All-Big Eight Conference defensive back, he was a member of three Mizzou bowl teams and was selected for Missouri’s all-century team in 1990. Wright still shares the Mizzou record for most pass interceptions in a game (three vs. San Diego State in 1979).

After his stellar career at Mizzou, Eric Wright was selected in the second-round (40th overall) of the 1981 NFL Draft by the San Francisco 49’ers. While a member of the 49’ers from 1981 to 1990, Wright along with Ronnie Lott 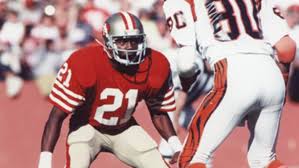 became a cornerback pair considered to be one of the best in NFL history. Teammates with such legends as Joe Montana, Jerry Rice, John Taylor and Rogers Craig, Wright was a defensive mainstay on the 49’ers teams that won Super Bowls in four of his 10 NFL seasons. In the NFC Championship game on January 10, 1982 against Dallas, on the Cowboys’ last possession in the final minute following ‘The Catch’ by Dwight Clark, Wright made a touchdown-saving tackle on Cowboy wide receiver Drew Pearson to preserve the 49er win and propel them into their first Super Bowl.

Considered one of the best cover cornerbacks of his day, Wright’s peak performance year was during the 1983 season when he intercepted seven passes for 164 yards and 2 touchdowns. He also intercepted passes in Super Bowl XVI and Super Bowl XIX and had five fumble recoveries during his career. Wright was a two-time NFL all-pro and Pro Bowl game selection in 1984 and 1985. For his career, he finished with 18 interceptions and scored two touchdowns.

Wright missed a majority of the 1986 and 1987 seasons with a deep groin pull and chipped bone in the area, missing all but four games during the two-year stretch. But he returned as a starter in 1988 and was on the 49ers back-to-back Super Bowl-winning teams. He is currently an alumni coordinator for the 49ers. “As the alumni coordinator for the 49’ers,” he said. “It’s part of my job description to stay in touch with the alumni. It’s something I enjoy a great deal and keeps me in touch with the team.’’