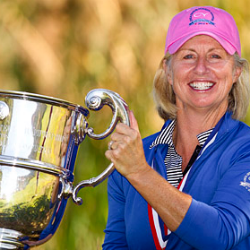 For someone who didn’t get started in golf until her mid-20s, Ellen Port has done quite nicely on the links. And that’s putting it mildly.

A teacher at John Burroughs High School, Port recently captured the USGA Senior Women’s Amateur Championship, becoming only the second woman to win both the Mid-Amateur and Senior Amateur titles in her career.

A record four-time U.S. Women’s Mid-Amateur champion (including 2011), Port is now the 10th player to win five USGA women’s championships. She previously captured the championship for women age 25 and older in 1995, 1996 and 2000. The 11-year span since her last victory broke the championship record of seven years held by Carol Semple Thompson, who won in 1990 and 1997.

“It’s just a culmination of a lot of hard work and still having a life outside of golf and still wondering if you could still win,” said Port, a mother of two who celebrated her 50th birthday just prior to the tournament. “It’s been a really special week.”

Port has been one of the leading women golfers in the St. Louis area for many years. The golf coach and physical education teacher at John Burroughs School received a 10-year exemption to the Women’s Mid-Amateur for her winning effort last year. She also received two-year exemptions into the Women’s Amateur, Senior Women’s Amateur and Women’s Amateur Public Links. Port, who has been voted “Woman Golfer of the Year” seven times by the Metropolitan Amateur Golf Association, is also a past winner of the Bernice Edlund Award, which is given to the St. Louis area golfer in recognition of an “Admired Missouri Sportswoman’s Accomplishments. 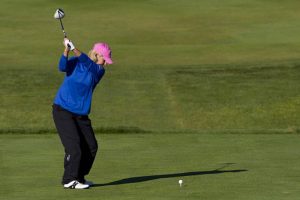 Ellen joined the John Burroughs faculty in 1986 and besides golf and teaching physical education, has coached track, basketball, the junior varsity field hockey and boys’ varsity golf. Under her leadership, the Burroughs golf team has claimed two state championships.

An excellent tennis player, Port actually attended the University of Missouri to play tennis, but after graduation, became a serious student of the game of golf. It was not until her first year at Burroughs, at age 25, that Port actually took up the game – and she quickly excelled.

She has won four National championships and represented the United States in two U.S. Curtis Cup competitions. In 2000, she was recognized by the Regional Chamber and Growth Association during the Bicentennial Celebration as one of St. Louis’ top 100 athletes of all time.

“My progression was like a storybook, where every year I got better,” she said in a STLMag.com article. “I worked my way up and by 1993 or ’94 I became good enough to play for my country on the Curtis Cup team … and I hadn’t started playing until 1987 or ’88. As I was doing it, I didn’t appreciate what I was accomplishing, because I wasn’t a golfer.”