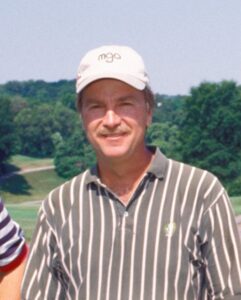 Don Bliss was first introduced to golf when he started to caddy at Glen Echo Country Club at age 10. He played with his father on the nine-hole, St. Ann’s public course until they joined Norwood Hills CC when he was 15.

Bliss won a junior tournament at Forest Park when he was 14 and the St. Louis Jr. District when he was 15. He wanted to play golf at the University of Missouri. but without a scholarship offer, he decided to walk on at Oklahoma State.

Bliss lettered three years at Oklahoma State and won two tournaments including the Big 8 championship in 1973. During his senior year, he earned All-American honors with one win and an eighth-place finish in the NCAA tournament. He received the Oklahoma State Player of the Year award in 1974.

After graduation, Don was unsuccessful in finding a financial sponsor to try to play the PGA tour. He contacted Bob Cochran Jr. in St. Louis who hired him as a sales trainee in 1974. He was relocated to Kansas City and Orange County, CA for seven years before moving back to company headquarters in St. Louis in 1981.

Bliss has qualified for 29 USGA Championships including 15 U.S. Amateurs, five Mid-Ams, one U.S. Open, two U.S. Senior Opens, Four U.S. Senior Amateurs, and two State Team Championships. He was runner-up in the Mid-Am medal play rounds and made two Holes-in-One in the same round at the 1987 Mid-Am, which is a USGA record.

Over the years, Don tried to have the proper balance between his family, his job, and his competitive spirits and he is sure that sometimes he compromised too much towards golf, but he has been blessed with a loving wife (Joan) who has been a great mother of their 3 beautiful children.

For whatever success Don Bliss achieved with golf, he is grateful to his parents for the opportunities they provided him to compete as a junior golfer and most grateful to his wife, children, and close friends for all their support over the many years.