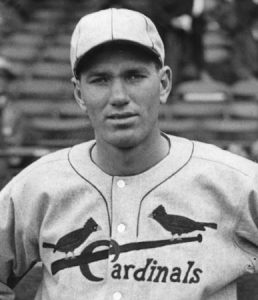 If there was ever a right time for a baseball player to arrive upon the major league scene, it was the early 1930s for Dizzy Dean. Especially, with the St. Louis Cardinals.

When the “Gas House Gang” was in its full glory, Ol’ Diz was there to help lead the charge, with his strong right pitching arm on the field and with his zaniness off the field. The homespun Hall of Fame player, who later turned broadcaster, was the anchor for the Cardinals’ pitching staff from the time he started in the St. Louis minor league system to the time he was literally knocked out of the pitching mound. The injury, when he took a line drive off his toe during the 1937 All-Star Game, actually limited his major league career to six seasons. But, oh, what a six seasons they were.

Jay Hanna “Dizzy” Dean (sometimes know as Jerome Herman Dean) grew up the son of a poor sharecropper in Lucas, Arkansas, and used to help his father and brother pick cotton. He dropped out of school by the fourth grade but was pitching for the high school team at age 14. He was signed by the Cardinals at the age of 18 in 1929, but pitched most of his first two seasons in the minor leagues. Dean was called up to the parent club to pitch the last game of his first season — a three-hit shutout against Pittsburgh. However, the following year Dean was sent back to Houston where he led the Texas League with 26 wins, 303 strikeouts and an ERA of 1.57.

Dean joined the “Gas House Gang” as a rookie in 1932 and continued his winning ways, posting 18 victories and led the NL in strikeouts, shutouts, and innings pitched. But has Ol’ Diz liked to say, “You ain’t seen nothin’ yet.” In 1933 he won 20 games and led the National League in strikeouts. On July 30, 1933 in the first game of a doubleheader, Dean struck out 17 Chicago Cubs batters to set a record for that time. 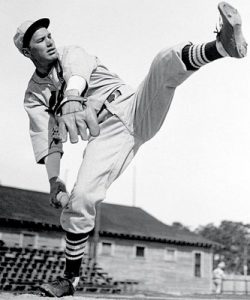 In fact, from 1933-36 he dominated the league, winning 102 games. He led the league in complete games each year, and averaged 50 games and more than 300 innings per season, often coming in from the bullpen between starts. In January 1934, the outspoken Dean boldly predicted the Cardinals would win the N.L. Championship and that he and his brother, Paul, would combine to win 45 games that season — an incredible prophecy because Paul had never pitched a game in the majors. The brothers, however, exceeded that prediction with Dizzy posting a 30-7 record and Paul winning 19. Dizzy led the league in wins, strikeouts, shutouts, and complete games, was second to Carl Hubbell for the ERA crown, and batted .246. He easily outdistanced Paul Waner for the MVP award. Oh yes, the Cardinals also won the pennant and Dizzy and Paul combined to win all four games of the seven-game World Series.

In 1935, Dean led the league for the third time with 28 wins. He also won strikeout championships in 1934 and 1935. Diz was on a roll. In fact, he won four consecutive strikeout titles and led the National League in complete games for four consecutive seasons.

Dean also served up plenty of shenanigans, making him one of baseball’s premier gate attractions. He gave reports “exclusives,” telling each he had different first and middle names  and birth places. Once, he even brought a black cat into the stadium and pretended to put a hex on the rival team.

But in 1937 tragedy struck Dean at the All-Star game. A line drive off the bat of Cleveland’s Earl Averill broke toe. The injury seemed minor at the time, but the star hurler rushed back too soon, favored his foot and altered his pitching motion. The result was that he injured his valuable right arm and lost his blazing fastball. Ineffective, Dean won less than 20 games the remainder of his career. He pitched for the Chicago Cubs (1938-41) and then pitched one game for the St. Louis Browns in 1947. That game came on the last day of the season after Dean became a broadcaster.

He took his act to the Cardinals’ broadcast booth in 1941, when the ungrammatical, chatty farm boy was an instant success. For Dean, slide became “slid, slide, slud.” Fielders “threwed” the ball, and runners returned to their “respectable” bases. English teachers cringed, but fans roared. He called games for the Cardinals (1941-46) and then for the Browns the following year. After watching many of the Browns’ badly pitched games, Dean reportedly said on the air, ” I can pitch better than nine out of the ten guys on this staff!” The Browns management, needing to sell tickets, allowed him to pitch the last game of the season. Dean, then 37, pitched four innings without allowing a run. After the game, he said of his pitching, ” I’m done. Talkin’s my game now.”

In 1950 Dean began working on the Game of The Week. He lasted as a television and radio broadcaster for two decades and was selected to the baseball Hall of Fame in 1953.