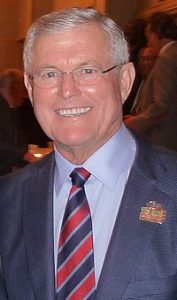 How many coaches can say they won National Football League championships with two different teams?  Dick Vermeil can. Vermeil led the Philadelphia Eagles to the Super Bowl, but lost in 1980. In 2000, he coached the St. Louis Rams to a Super Bowl championship.

Verrmeil had one of the most distinguished coaching careers in NFL history. He spent 15 seasons as an NFL head coach and was a member of the league’s coaching fraternity for 19 seasons. In addition, he enjoyed great success as a football broadcaster, serving as an analyst for numerous pro and college games.

Vermeil began his coaching career at the high school level in 1959, after earning bachelors and masters degrees from San Jose State University.  In 1965, Vermeil was hired at Stanford as head coach. In 1974, he was named head coach at UCLA and eventually guided the Bruins to a Rose Bowl Championship.

Vermeil’s NFL coaching career began when he was chosen to guide the fortunes of the downtrodden Philadelphia Eagles franchise in 1976. In seven seasons there, Vermeil led the Eagles to four playoff appearances. The highlight came in 1980, when he guided Philadelphia to the NFC championship. His Eagles lost Super Bowl XV and he retired in 1983. 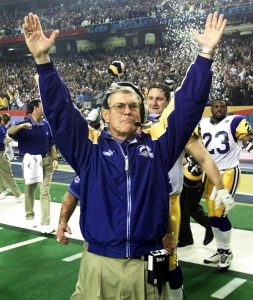 Vermeil turned to television broadcasting, where he spent 14 years as an analyst for CBS and ABC. He also provided color commentary for Kansas City Chiefs telecasts from 1989 through 1996.

In 1997, the Rams brought Vermeil back to the NFL when they hired him as head coach. Two years later, Vermeil led the Rams to a thrilling Super Bowl victory over the Tennessee Titans, capping a wildly successful 1999 season for a team known as “The Greatest Show on Turf.”

He again retired, but returned to coaching in 2001 when he was named the ninth head coach of the Chiefs. He retired from coaching for good in 2006. Since leaving the Chiefs, Vermeil has served as a television color commentator for ESPN and the NFL Network.

While in Kansas City, Vermeil and his wife Carol were active in a number of charitable endeavors. Most notably, they served as chairpersons for the Chiefs’ Children’s Fund Benefit Game. The 2005, 2006, and 2007 beneficiary of that game was Operation Breakthrough, a day care center for inner-city families in Kansas City.

After returning home to the Philadelphia area, Vermeil has continued his extensive charitable work. Several Philadelphia organizations have benefited from his involvement, including The Mary Campbell Center, Elwyn Inc., Devereux and The Second Mile Center. In addition, a golf tournament that bears Vermeil’s name annually earns $100,000 for the Boy Scouts of Chester County. He is also involved with People for People, Inc., a community outreach organization founded by Rev. Herbert Lusk, a former Eagle who played for Vermeil.

The Vermeils currently spend most of their time tending to Vermeil Wines, a partnership with lifelong friends at OnTheEdge Winery and Frediani Vineyards in Napa Valley, California.

In 2007, Vermeil was awarded an honorary Doctorate of Law Degree from Chestnut Hill College, located in Philadelphia, PA.