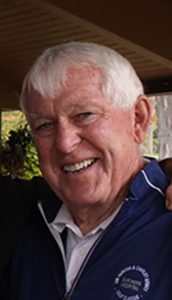 A “local legend” in St. Louis golf, Dick Shaiper has touched the lives of many golfers over the years. He is credited with founding the concept for charities to raise money through golf tournaments. In fact, he has been involved with raising more than $70 million for hundreds of needy causes. At one time, Shaiper managed some 55 charity tournaments a year at Norwood Hills Country Club. Tonight, he will be inducted into the St. Louis Shrine. Here is his story in his own words.

My first exposure to golf was as a nine-year-old. After pestering my father about my desire to caddy, he finally relented and dropped me off at The Algonquin Country Club one early Saturday morning. The Harrison brothers, who were the golf professionals, showed me photos of what caddies were supposed to do, stamped my caddy ticket and sent me onto the course. At the end of that first day I had caddied 45 holes. My reward was $3.25, two golf balls, and a really sore shoulder. I couldn’t wait to get back the next day. I was completely hooked on golf and 72 years later, I still feel the same.

Golf has been my life and my livelihood. I have been blessed to have made my living doing something that I love. Almost from the beginning, my goal was to become a PGA professional. I was willing to do whatever that took: teaching, playing, keep- ing the membership happy. I was all in! As a club professional, a position I held for more than 40 years, I worked seven days a week, 12-15 hours a day and almost never regretted one day of it.

I received my early golf education by watching the better players while caddying. My first accomplishment came when I won the Caddy Championship at Algonquin. I was 13. When I brought that trophy home, I felt like I had won the U.S. Open.

The competitive part of golf is one of my favorites because the results are up to you. Our Webster Groves High School team was undefeated. We did not lose even one match during our four years of playing. The culmination of that wonderful experience came when I won the Missouri State High School Individual Championship in 1951.

Though I was offered some college golf scholarships out of state, my father wanted me to go to school in St. Louis for at least one year. I attended Washington University and after my junior year, I received a letter from Uncle Sam outlining what I would be doing for the next few years. After basic training I was sent to Germany as part of the 3rd Armored Division. Some 2 1/2 years later, I returned to Missouri to pursue my career as a professional golfer. 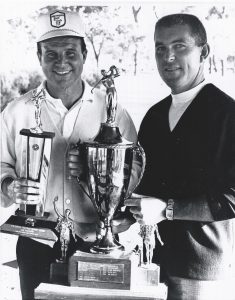 I began my apprenticeship in the PGA as Assistant Golf Professional at Algonquin, the place I started as a caddied 15 years ear­lier. I was fortunate to work for Milon Marusic, the club’s head pro. Milon was the complete professional. He was a gentleman, an excellent teacher, a great player and a savvy businessman. He became my mentor, teaching me every thing he knew about the golf industry and then some. Like a sponge, I soaked it all up.

In 1963, the head pro job at Glen Echo C.C. opened up when Don Clarkson moved to Old Warson C.C. At age 29, I took that job, which proved a huge break for me. The job was looking to bring in additional revenue and I had an idea that I presented to the board. They allowed me to open the club on Mondays for golf events involving outside groups, mainly charities. That was the beginning of charity golf events in St. Louis.

The trend continued as I moved from Norwood Hills to Whitmoor C.C. and then The Missouri Bluffs. The events were a win-win proposition. The clubs brought in much needed rev­enue and the charities did very well. With the help of great staffs at all four clubs, we were able to raise over $70,000,000 for charities over a 42-year period. Although putting on these events took a lot of planning and work, being the master of cer­emonies and auctioneer at the events was a lot of fun!

The one thing that I am most proud of is my membership in the PGA of America. I love the standards of excellence they expect from their members. If you work hard and conduct your­self properly, you can be the most influential and important per­son at the golf club. Golf has been good to me and I have enjoyed the journey. I have been blessed with a healthy and enjoyable career and I wouldn’t change much even if I could. For my golfing (and soon to be golfing) family: my wife, Gay, our seven children, 19 grandchildren and one great-grandchild, I have been extremely blessed. And for all of this, I thank God.