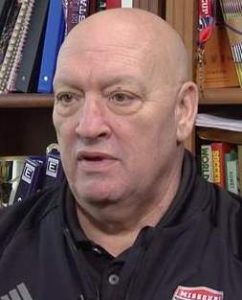 Forward Denny Vaninger has been called the best player ever produced in St. Louis when attacking the opposition from the air or beating defenders to a loose ball and scoring. “Denny was maybe the best in the air we ever had, but he was faster and better with his feet than most people realized,” said his former Florissant Valley Community College coach Pete Sorber.

“I used to line them up on the half line and I’d stand about halfway and I’d just roll out a ball and call out a name. Well that guy had to chase the ball and the guy on the left was a defender. For two seasons Denny got away every time. He’d beat them to the ball and the defender never caught him. And he didn’t stumble over the ball, either. He got the shot off.”

Vaninger arrived at Florissant Valley in 1970 fresh off a terrific career at St. Mary’s High School where he scored 23 goals and helped the Dragons to a Missouri State title. He didn’t miss a beat playing for the Norsemen and immediately made Florissant Valley one of the top junior college clubs in the nation. 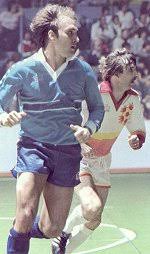 Vaninger continued to excel as a pro. He signed with the St. Louis Stars of the North American Soccer League in 1973 and scored 21 goals. He spent five seasons in St. Louis before signing with Fort Lauderdale in 1978. Vaninger played in New Jersey and Miami in the NASL before moving indoors with the St. Louis Steamers in the Major Indoor Soccer League in 1980. Indoors, he was more effective because of his size and speed. Vaninger scored seven goals and had three assists in nine games before injuring his ankle, which ended his playing career.

He now is the director of coaching for the Missouri Youth Soccer Association.