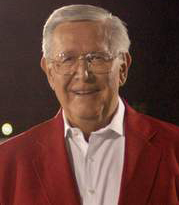 Soccer comprised a major part of the A-B’s sports marketing program under Long. He initiated A-B’s sponsorship of the World Cup in 1986. That agreement has continued for each subsequent World Cup. He led A-B in its support of the then-financially struggling U.S. Soccer Federation in the 1980s. He spearheaded the construction of the St. Louis Soccer Park, perhaps the first soccer-specific facility in the United States, which would go on to serve as the host of international, professional, college and youth soccer matches. In the early 1970s, he founded Busch Gardens Soccer Club, which grew to become one of the top youth soccer organizations in the United States. The support for soccer that he developed at A-B, his efforts to bring the World Cup to the United States, and his youth soccer coaching career (570 wins and 50 losses) earned his induction int