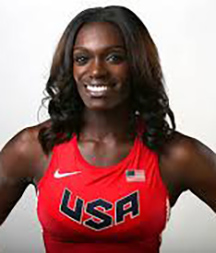 Once at UCLA, the student-athlete earned titles of 2003 U.S.A. Junior National Champion (13.28 seconds) and Pan American Games Champion (13.42 seconds) in the 100-meter hurdles, while also receiving All-American honors twice at the 2004 NCAA Outdoor Track and Field Championships. There, she placed eighth in the 100-meter hurdles and second with the 4×100-meter relay.  In 2006, she was appointed the women’s track and field team captain. By graduation in 2006, with a Bachelor of Science in Psychology, she was a seven-time NCAA All- American.

Coming off knee surgery early in 2008, Harper Nelson qualified for the USA Olympic Team at the U.S. Olympic Trials in Eugene, Ore., placing third in the 100-meter hurdles by .007 seconds.  She was 24 at the time, when the average age in her specialty was 28.  In Beijing she ran a then personal best time of 12.54 seconds to take Olympic gold. She would continue winning in 2009, when she won her first outdoor championship at the Visa Championship series in a wind aided time of 12.36 – the sixth fastest time ever under any conditions.

In 2010, Harper Nelson suffered and overcame another knee injury. Returning to the track in April 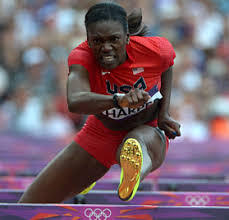 2011, in her first competition in June, she won a second bronze medal at the U.S. Outdoor Championships in Eugene. At the September 2011 International Association of Athletics Federations (IAAF) World Outdoor Championship in Daegu, Korea, she recorded a personal best 12.47 seconds to win a bronze medal, giving her momentum to take into the 2012 Olympic year.

Harper Nelson solidified her chance to defend her gold medal at the 2012 Olympic Trials in Eugene by winning her event with a time of 12.73 seconds. She would go on to the 2012 Olympic Games in London and receive a silver medal, with a time of 12.37 seconds, which replaced her previous personal best and surpassing the Olympic record.  Later in the year, she won her first IAAF Diamond League Championship. Dawn then returned in 2013 to take the Diamond League champion title again, ranking her number two in the world going into the 2014 track and field season.

Upon winning her first Olympic medal in 2008, former Illinois Governor Rod R. Blagojevich proclaimed October 6, “Dawn Harper Day” for the state of Illinois. Active in her community, the Nike-sponsored athlete serves as the spokesperson for the American Diabetes Association and a community ambassador for United Way of Greater St. Louis.