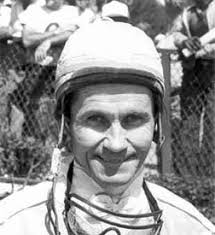 When David Gall climbed off his 7,394th winning mount in September 1999, it marked the end of a long, illustrious career for thethen 57-year old Hall of Fame jockey. Only three Hall of Fame jockeys – Bill Shoemaker, Laffit Pincay and Pat Day had won more races at that time than the farmer’s son from Rose Valley, Saskachewan. Performing at Fairmount Park in Collinsville, Gall had 10 mounts in the 11-race card on his final night, which brought his number of mounts to an astounding 41,709 in a 43-year career. He won 7,389 of those races.

His mounts earned $25 million and twice he was the leading rider in North America in terms of number of victories – 479 in 1979 and 376 in 1981. But Gall was never one to be impressed with numbers. “I never kept track of that stuff, “ he said. “I was too busy doing the riding. I always said, ‘You do the counting, I’ll do the winning.’” Despite his amazing record, Gall was not a household name outside of Collinsville, Ill., site of the 190 acre Fairmount Park race track. He was king of the $3,000 claimers, baron of the B-circuit.

Gall began riding at the age of 15 in Canada on the Prairie circuit – Regina, Saskatoon, Calgary, Winnipeg, Edmonton, and later Vancouver and down to Bay Meadows and Tanforan in Northern California and Arizona before making his home at Fairmount, where he became a legend affectionately known as “The General.” He once won eight races on a 10-race card at Cahokia Downs, a record he shares with six other riders, and several times won seven races on a program.

During a 41-year career, David Gall was a two-time winner of the United States national riding title, winning more races than any other rider in 1979 and 1981. In 1993, Gall was inducted in the Canadian Horse Racing Hall of Fame. In 1996 he was the recipient of the Avelino Gomez Memorial Award, given annually to a jockey who is Canadian-born, Canadianraised, or a regular in the country for more than five years, who has made significant contributions to the sport.

Gall sustained some serious injuries during his time aboard his mounts, especially his last few years of riding. He was hurt in 1995 at Sportman’s Park in Chicago and then he suffered a broken ankle at Fairmount when a horse pinned his leg in the starting gate. In 1997 at Hawthorne Racecourse in Chicago, Gall was seriously injured when his mount fell and broke its front leg. Gall suffered a broken jaw and broken ribs in the spill. Rehabilitating from those injuries became increasingly more difficult as he grew older. “Injuries had been coming regularly the last four years,” he said after his last race. “I just got tired of it.” Even so, Gall managed to heal and come back strong – and with success.

Gall retired from riding on September 18, 1999, and, as mentioned, ranked fourth all-time among jockeys. He has remained in the industry as a trainer/owner and still competes at Fairmount Park. “Anyone can get lucky now and then and win a bunch of races on a single racing card, but to me, it’s consistency that counts. That’s why I am proudest of my national championships,” said Gall.

In his last career victory Gall rode on a mount called Sturley. He broke from the gate quickly but had only a few horses beat at the mid-point of the six-furlong race, the last race of Fairmount Park’s 1999 season. He needed to urge on his mount, which he did to win the race.

What was his favorite memory from 43 years of riding? “It’s been so long, I can hardly remember,” he said. “I guess it was in 1979 when I was the leading rider in the country for the first time. That’s what I liked the best.”

(Adapted from the Canadian Horse Racing Hall of Fame)