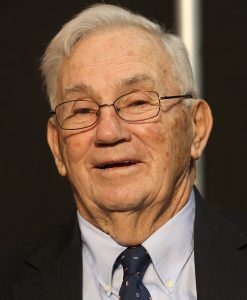 of Branson, Mo., Dave Shannahan played on the first Branson High School team to go to the Missouri state tournament in 1952.  Graduating from Drury College in Springfield, Mo., in 1956 he began coaching in Missouri and Nebraska for 2 years before coming to Johnson City, Ill.,  where he coached for five years.

He continued teaching and coaching at Sparta and then Belleville West, where he remained for seven years as head basketball and golf coach.

With a Masters from SIUE he taught physics and coached basketball at Belleville Area College (now Southwestern Illinois College), leading his teams to 100 victories. Then, due to a rules change by the IHSA, he coached at O’Fallon and Waterloo high schools while continuing his teaching duties at SWIC. He retired From SWIC in 2000.

During his coaching career his basketball teams went 508 -373 in 31 years, which included seven regional and one sectional championship. In his first 29 years he had only three losing seasons.

Dave was also the head golf coach at Belleville West. He coached golf at Belleville West for seven years. He never had a losing season and never lost a conference, district or sectional title.  His teams were state champions for three years, runners-up once and produced an individual champion, Jay Haas.

He helped found the Illinois Basketball Coaches Association in 1970 and was inducted into that Hall of Fame in 1990. He and his son, Larry, won two Father-Son district golf championships in St. Louis in the 1980’s.

He was also honored by his alma mater, Drury College in Springfield, Mo., with a life-time achievement award and entered their Hall of Fame in 2009.