After 32 years as a Major League umpire, Dave Phillips has seen it all. “I umpired on the same fields that Babe Ruth, Ty Cobb, Stan Musial and Ted Williams once played on,” he noted. “Umpiring allowed me to know all the players and managers, and I liked most of them.”

Phillips, who graduated from Jennings High School in St. Louis, was always regarded as one the best umpires in baseball during his storied career. He grew up watching his dad, Bob, umpire in the minor leagues, and decided to follow in his footsteps at the ripe old age of 20. He graduated from the Florida umpiring school at the top of his class and was selected to umpire in the Midwest League in 1964. Dave spent seven years in the minors before being promoted to the majors in 1970 — one of the youngest umpires in the history of the game.

He was chosen to umpire in four World Series (1976, 1982, 1987 and 1993) and worked numerous All-Star games and championship playoff series. He was selected to become a crew chief in 1979 and worked in that capacity a record 22 years before retiring in 2002. He was also selected by the Commissioners’ office to umpire an exhibition series in Japan and conducted umpire clinics in Europe for Major League Baseball. 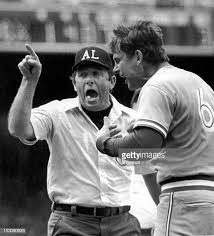 During the winter, Dave officiated college basketball for the Big Eight, Missouri Valley, The Metro Conference and Conference USA, before being named supervisor of officials for several college conferences. In 2004, Dave was the first umpire to be inducted into the Missouri Hall of Fame and says he is “honored, appreciative and humbled,” to be the first sports official to be inducted in the St. Louis Sports Hall of Fame.

“Dave’s career touched several baseball eras,” said broadcaster Bob Costas. “When he began his first season as an umpire in the spring of 1971, he was working games involving players who had been teammates and opponents of Ted Williams and Mickey Mantle. When he retired 32 years later, he was sharing the field with notables like Alex Rodriguez, Ichiro Suzuki and Derek Jeter.

“The game of baseball has changed greatly over that span of time, but the definition of a good umpire has not,” Costas added. “No one can get them all right, but over thousands and thousands of calls, the best umpires have to be nearly perfect. Dave was. An umpire should never needlessly call attention to himself. Dave never did. Still, he had a definite personality and presence. He could take charge of a game without being overbearing. Dave managed to be simultaneously authoritative and had great people skills. He earned respect by showing respect.”

After his retirement, Dave co-wrote the book “Center Field On Fire,” which highlights many of the historical, controversial and just plain peculiar incidents on a baseball diamond. Among the more notable games:

• The infamous 1979 Disco Demolition Night in Chicago when he came onto the field expecting to start the second game of a doubleheader, only to find thousands of fans on the field and that center field was literally on fire due to a radio promotion gone bad.

• “Bat Gate” in 1994 at Chicago’s Comiskey Park when Phillips confiscated Albert Belle’s suspect bat that was later stolen out of the umpire’s dressing room.

• He was also the first umpire to eject spitballer Gaylord Perry, and was on the mound with Joe Niekro, the pitcher for the Minnesota Twins in 1987, when he “accidentally” dropped an Emory board out of his back pocket that he had been using to scuff the baseball.

Dave always felt extremely lucky, he said “a lot of people go through life and never find a job they really like,” but he not only found a job he liked, but a profession he truly loved.” Dave married his high school sweetheart, Sharon, 47 years ago. They have 3 children – Kim, Jill and Randy, along with 6 grandchildren.