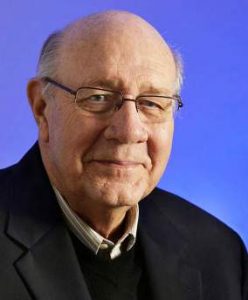 Dave Luechtefeld hasn’t strayed far from his original roots. A graduate of Okawville High School, he returned to his prep alma mater after college to teach and coach for some 38 years.

A multi-sport high school standout who once scored 64 points in a game, the 6-foot-7 Luechtefeld excelled in basketball and baseball. He even played – and excelled – in both sports at St. Louis University. But his plans to become a professional pitcher quickly changed when he suffered an arm injury.

He majored in history and government with a minor in education even though his goal was to be a professional baseball player. Then came the injury, a teaching job opened at Okawville and he turned to teaching and coaching. He coached basketball and baseball and became Okawville’s athletic director for 33 years.Over 38 years, Luechtefeld varsity basketball teams recorded 738 victories, placing him in the top 10 for career coaching triumphs in the state. But he didn’t exactly retire.

In 1995 he was appointed to serve as senator for the 58th District. His campaign promise was to work hard and be honest. He was selected assistant Republican leader in 2003 and then Deputy Republican Leader during his final term of service. His committee assignments included agriculture, education, executive, financial institutions, and higher education. He served as the minority spokesperson on the Education and Higher Education committees. He was also a member of the Subcommittee on Election Law. He retired from government last month.