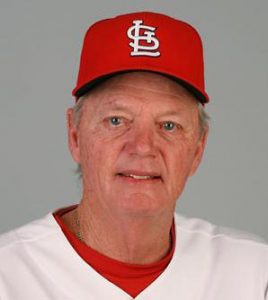 Dave Duncan knows pitchers. He has caught ’em and he has taught ’em during a Major League career that has spanned half a century. He was a catcher for 11 years, a coach for 34 years and, since 2013, he has served in an advisory role.

The mentor of four Cy Young Award winners, Duncan spent the majority of his coaching career in tandem with manager Tony La Russa. After three years as a coach with the Cleveland Indians and one with the Seattle Mariners, Duncan became La Russa’s pitching coach with the Chicago White Sox in 1983.

The two were joined at the hip for the next 29 seasons, in Chicago, Oakland and St. Louis, before La Russa retired after the Cardinals’ 2011 World Series victory. A few months later, Duncan took a leave of absence to deal with personal matters related to his wife’s battle with cancer (Jeanine Duncan died in 2013). 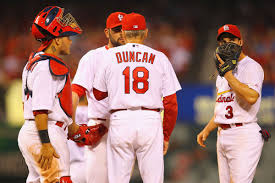 La Russa, who went into baseball’s Hall of Fame in 2014 and whose teams won 2,728 regular-season games, cited Duncan’s value to his success during his acceptance speech in Cooperstown.

Originally signed as an amateur player by the Kansas City Athletics in 1963, Duncan homered in his first professional at-bat, for Daytona Beach of the Florida State League in 1964. In 929 big-league games, he batted .214, hit 109 homers and drove in 341 runs.

Defense and handling pitchers were his fortes. Two of his highlight seasons as a player came in Oakland. In 1971, Duncan caught 24-game winner Vida Blue and 21-game winner Catfish Hunter, and the A’s pitchers finished second in the American League in earned-run average and strikeouts. The following year, Duncan compiled a career-best .993 fielding percentage and the A’s won the World Series. In all, Duncan played for the Kansas City/Oakland A’s, Cleveland and Baltimore.

Baseball was in Duncan’s genes as both of his sons played in the majors. Chris Duncan, who was drafted by the Cardinals in the first round of the 1999 draft, was an outfielder who played five years for St. Louis, including the ’05 World Championship season.
Shelley Duncan, an outfielder-first baseman selected by the Yankees in the second round in 2001, played seven big-league seasons with New York, Cleveland and Tampa Bay.

Now 70, Papa Dunc still is dispensing his knowledge and wisdom as a pitching consultant for the Diamondbacks—whose chief baseball officer just happens to be a fella named La Russa.