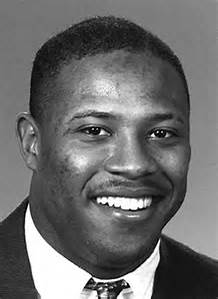 During the 1990s, Dana Howard was a constant around Illinois football circles. Whether it was playing for Bob Shannon at East St. Louis High School, or becoming a hard-hitting linebacker at the University of Illinois, Howard was proving himself as a great defensive player.

Over the span of four years with the Fighting Illini, Howard was a tackling machine. He recorded at least 100 tackles in each of his four seasons with the Illini and was named Big Ten Defensive Player of the Year in both 1993 and 1994. Nationally, Howard was selected as a two-time first team All-American those same years, adding to the Illini’s reputation as “Linebacker U.” But it wasn’t always easy for Howard. He was cut by his coach in junior high, was given a second chance, and proved he belonged. 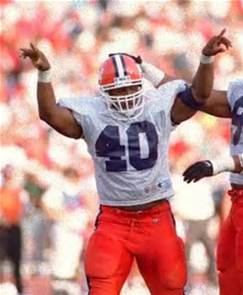 After success in high school, he had offers from several of the nation’s finest football programs, but chose Illinois. He didn’t disappoint. After his senior season, Howard became the first Illinois player to win the prestigious Dick Butkus award in 1994. In addition, he won the Jack Lambert award, given annually to the top collegiate linebacker. Howard is the all-time leading tackler in Fighting Illini history with 595 tackles.

A little undersized at an even 6 feet, Howard was drafted by the Dallas Cowboys in the fifth round of the 1995 NFL Draft and eventually signed with the St. Louis Rams, playing in 16 games as a rookie. The following season he signed with the Chicago Bears, but he injured his hand in the third game of the season.

Howard concluded his professional career with the Amsterdam Admirals, an NFL Europe team, in 1999.