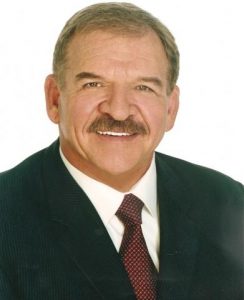 Dan Dierdorf excelled as an offensive lineman for 13 seasons for the St. Louis football Cardinals from 1971 through 1983. He seemed destined for stardom from the moment he joined the Big Red as a second-round choice and the 43rd player selected in the 1971 draft.

Dierdorf, who had been a consensus All-America at Michigan in 1970, possessed size, speed, quickness, discipline, intelligence and consistency, all necessary attributes for an outstanding lineman. At Michigan, In 1970, Dierdorf assisted the team to a 25–6 record in his three years as a starter. The Wolverines were Big Ten Champions in 1969. Dierdorf made all-conference in 1969 and 1970. He was chosen for the East-West Shrine Game and Hula Bowl and for the 1971 College All-Star Game.

The 6-3, 275-pounder from Canton, Ohio, where he was born on June 29, 1949, played both guard and tackle his first two seasons with the Cardinals before settling in as the permanent right tackle in his third season. Dierdorf, who was equally effective as a blocker on both running and passing plays, was the ringleader of the line that permitted the fewest sacks in the NFC for five straight years in the mid-1970s. The 1975 Cardinals offensive line, consisting of Dierdorf, Conrad Dobler, Bob Young, Tom Banks and Roger Finnie, allowed only eight sacks, then a National Football League record, in 14 games.

In 1982, he moved to center where he was the starter in that season. 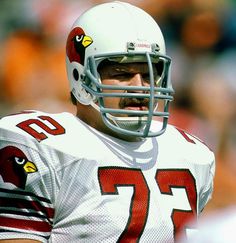 One of the big reasons was Dierdorf, who did not permit a single quarterback sack during the 1976 and 1977 seasons. His play was part of the reason the Cardinals won back-to-back National Football East Division titles in 1974 and 1975.

He proved his durability by playing in every game until a broken jaw forced him out of two games in his seventh season in 1977. In 1979, he did miss 14 of 16 games because of a dislocated left knee. However, he bounced back strongly in 1980 with another All-Pro caliber season. In 1982, Dierdorf unselfishly responded to a personnel emergency on the offensive line by agreeing to move to center. He not only made a smooth adjustment to the new position, but he proved to be especially effective blocking against the bigger nose tackles of the then-popular 3-4 defensive alignments.

After his retirement, Dierdorf successfully made the transition to the broadcast booth. He called Cardinals’ games on radio for KMOX in 1984 before moving to CBS television for two seasons. In 1987, he was added to the Monday Night Football team. Dierdorf stayed at ABC for 12 seasons before a shakeup after the 1998 season. He was immediately rehired by CBS to broadcast NFL games for that network, where he was also a color analyst. Dierdorf was the 2008 recipient of the Pro Football Hall of Fame’s Pete Rozelle Radio-Television Award.