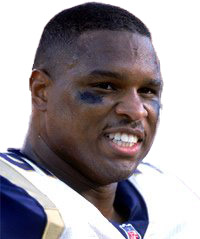 For someone who wasn’t drafted by a National Football League team after completing his senior season at the University of Washington, D’Marco Farr did all right for himself during his pro career. Farr played in 109 games, in his seven-year career, with the Los Angeles Rams and St. Louis Rams. He also participated in four playoff games and a Pro Bowl game.

Farr played defensive tackle for the Rams from 1994–2000 and recorded 36.5 career sacks and three interceptions. He was a member of the Rams team that won Super Bowl XXXIV. 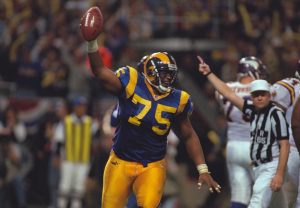 Once the draft ended, DiMarco’s phone rang off the hook. “My agent called and there was a bidding war going on and a signing bonus kept getting higher and higher,” said D’Marco, happy to offset his disappointment over not being drafted. “I signed with the Rams for $40,000, which was more than the 4th round picks. The Rams would not draft me because I was small but they wanted me for that defense.”

He made the team and had an incredible career with the Rams, but he says the FA (free agent) designation will plague him forever.

DiMarco uses his success to give hope to the undrafted players who show up in camp. “It’s gonna seem unfair but they are going to treat the drafted guys different and they’re always going to look to replace you first. You must accept it or not.”

Farr is now a part of the St. Louis Rams broadcasts. He did the preseason television color commentary for FOX and provides analysis for radio broadcasts during the season, 101ESPN.

He also is a part of the station’s afternoon drive program, The Fast Lane, with Randy Karraker. As of 2009, Farr is the lead color commentator for the Rams Radio.