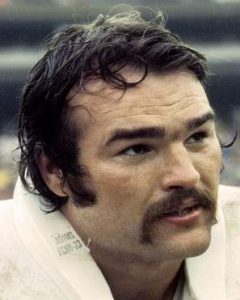 He was accused of punching Mean Joe Greene, spitting on Bill Bergey and kicking Merlin Olsen in the head. He freely admits that he bit Doug Sutherland. He once made an opposing player cry on the field. But beneath the mean and ornery facade of Conrad Dobler, who appeared on the July 27, 1977, cover of Sports Illustrated with the headline “Pro Football’s Dirtiest Player,” lived one of the best guards in the NFL during his 10-year career.

“Conrad was an outstanding offensive lineman in both areas—the running game and pass protection,” said Jim Hanifan, Dobler’s position coach in St. Louis for five seasons. “He brought an attitude that was second to none, and he played the game to the max. He was smart, tough and had a great passion for the game. His attitude permeated the offensive line.”

A fifth-round draft pick out of Wyoming in 1972, Dobler played on the Cardinals’ O-line for six years, starting as a rookie at left guard before switching to right guard in ’73, where he lined up next to Hall of Fame tackle Dan Dierdorf for t 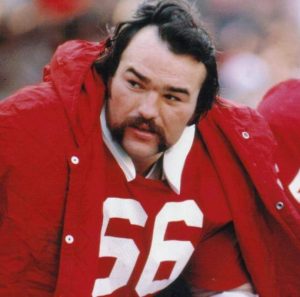 he next five seasons. Dobler was selected to three consecutive Pro Bowls (1975-77) and was part of a line that allowed only eight sacks, then an NFL record, in 1975. Opposing players always knew they were in for a long afternoon when Dobler lined up across from them.

“Game in and game out, I would see guys he was going against, whether they were All-Pro or Hall of Famers … the greater the player was, Conrad always made that player play his best,” Hanifan said. Although he didn’t receive as many accolades as quarterback Jim Hart, running back Terry Metcalf or wide receiver Mel Gray, Dobler was a key cog on a Cardinals team that won NFC Eastern Division championships in 1974 and ’75, and went 31-11 from 1974 to ’76. That was the Big Red’s best run during 28 seasons in St. Louis.

It came crashing down in 1977, when the Cardinals went 7-7 and finished the season with an inglorious 17-7 loss to Tampa Bay, which had lost its first 26 NFL games. “From the penthouse to the outhouse,” Dobler said as he undressed in the locker room after the Tampa Bay game. That signaled the end to the “Cardiac Cards” era. Coach Don Coryell departed shortly after the season and several players followed his exit, including Dobler, who was traded to New Orleans.

Dobler played four more seasons, two with the Saints and two with Buffalo, before retiring after the 1981 season. During his career he played in 129 games, starting 125, and recovered nine fumbles, including one for a touchdown.