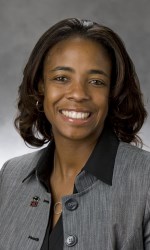 The 1988 Lutheran North yearbook indicates that Connie was chosen as the most athletic person in the senior class.  She did participate and lettered for four years in basketball (still holds the record for rebounds) and in track and field (school record) where she placed in the state high jump several times. In basketball she was the team captain.

What is not remembered as much is her membership in the National Honor Society and her excellent academic record. She was selected as Homecoming Queen her senior year.

Connie attended Kansas State University with a scholarship in track and field. She graduated in 1992 with a B.S. degree in Life Science and Pre-Nursing Degree. In January, 2016 she was inducted into the K-State Athletic Hall of Fame. 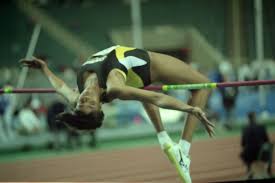 She was an eight-time letter winner in track and field (4 indoor and 4 outdoor).  She was a four time outdoor All-American in the high jump during her career at K-State. She set the school indoor high jump record in 1992 and currently ranks third for the outdoor record.

In the national trials for the Olympics, Connie had a previous personal best (PR) of 6’3.5”.  Her goal in the trials was to break her PR and make the Olympic Team.  After two misses at 6’4.75, she cleared her PR on her third and final try to be one of the three women representing the USA in the Olympic Games.  She met both her goals and was nationally ranked No. 2 in the United States. While not winning an Olympic medal, she was ranked 15th in the world.

Connie is presently the coach and director of Track & Field and Cross Country at Northern Illinois University. Her advice: Believe in yourself and you can accomplish anything if you put in the work.