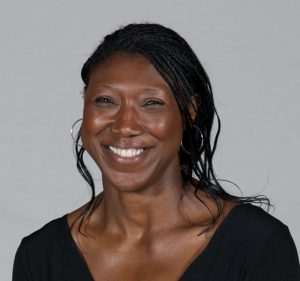 Connie Price-Smith has reached levels of athletic greatness shared by few others. The native of St. Charles, Mo., is one of 30 U.S. athletes — both men and women — who have competed in four Olympics. A shot putter and discus thrower, Price-Smith had the highest finish of any U.S. woman in the shot put since 1960 when she finished fifth in the 1996 Olympics. Her distance of 63 feet 0.75 inches at the 1996 Games is the longest of any U.S. female shot putter in Olympic history.

Although she never medaled during her Olympic competition, spanning 1988-2000, Price-Smith had one of the finest careers in the history of U.S. women’s track and field — despite the fact that she did not throw the shot compet

itively until her senior year at Southern Illinois University-Carbondale. She played basketball from 1980-84 as a center at SIU and led the nation in field-goal percentage (.650) as a junior in 1982-83.

Track and field success came quickly for Price-Smith. She won the Missouri Valley Conference outdoor and indoor championships in her one and only year at the collegiate level before embarking on a stellar international career. Starting in 1986, when she was fifth in the USA Indoor and sixth in the USA Outdoor Championships in the shot put, Price-Smith won two Pan-Am games championships, was a silver medalist in the 1995 World Indoor shot put and a bronze medalist in the 1998 World Cup shot put. She was the first U.S. woman to be ranked in the shot put’s world top ten for five consecutive years from 1995-1999.

Price-Smith wasn’t sure what lay ahead when she retired from competition. One phone call from her alma mater, SIU-Carbondale, took care of that. “When they called me and said they wanted me to become track coach, I said, ‘Are you serious?’” she says. “I wasn’t sure what I was going to do, but it was a great opportunity. The door opened and I stepped in and I’ve been very happy about it.”

It’s been a mutually agreeable relationship. Price-Smith has been coaching at SIU for 13 seasons, the last 10 directing both the men’s and women’s programs. Her coaching resume is almost as impressive as her competitive accomplishments: Price-Smith is a four-time Missouri Valley Conference coach of the year and has produced five MCC team championships, 155 individual MVC titlists, 42 All-Americans and five individual NCAA champions. In 2009, the Saluki women were ninth in the nation in the 2010 NCAA Outdoor champions, the best finish in the program’s history.

Looking back on her coaching career, Price-Smith says: “The decision to come back here was easy. It was like coming back home. I love being here and I’ll probably bleed maroon for the rest of my life.”