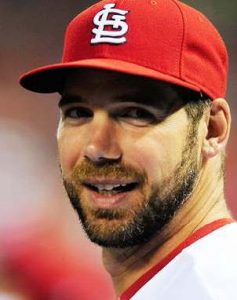 It didn’t take long for the Toronto Blue Jays to discover what they had when they drafted Chris Carpenter. In his minor league debut, Carp threw six scoreless innings, allowing only one hit and striking out nine. But by the time he made it to the majors, injures seemed to follow, slowing his progress and, eventually, being removed from the Jays’ 40-man roster.That’s when the Cardinals’ management stepped in, plucking the strapping right handed pitcher from the waiver list. The Jays’ loss certainly became the Cardinals’ gain.

Although Carpenter was forced to sit out the entire 2003 season due to a torn glenoid labrum, he came back with an impressive 2004, helping the Cardinals win the National League pennant for the first time since 1987. In September, Carpenter was benched with a nerve problem in his right biceps, ending his season and causing him to miss the 2004 World Series. 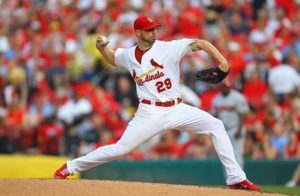 In 2005, Carpenter posted his best year to date. He set career bests in ERA (2.83), strikeouts (213), innings pitched (241.7), complete games (7) and shutouts (4) while amassing a 21-5 record with a 2.83 ERA for the Division Champion Cardinals and was selected as the NL’s Cy Young Award winner. Carp was selected as the NL starter in the 2005 All-Star game, and continued pitching well throughout the 2006 season, achieving personal highs such as striking out a career-high 13 batters on June 13, 2006, against Pittsburgh and winning his 100th career game in September 2006, against San Francisco. Carpenter was also voted on the 2006 All-Star game, and finished third in the Cy Young Award voting.

Carpenter won his first career World Series start in Game 3 against Detroit, pitching eight innings and allowing no runs on three hits. However, in 2007, Carpenter pitched only one game. He was sidelined with elbow problems and the team announced on May 5, that he would need Tommy John surgery and another surgery to trim bone spurs. As Carpenter was attempting to return from elbow surgery, further problems developed and on July 19 the Cardinals announced his season was over.

After making only one start in 2007, and only three starts in the 2008 season, Carpenter gave a stunning one-hit performance in his first start of the 2009 season against Pittsburgh, shutting them out in seven innings. On May 20, he beat the Cubs, 2-1, raising his winning percentage with the club to .726 (53-20), highest ever by a Cardinal through his first 100 starts.

By the time Carp retired after the 2012 season, he posted a 95-44 record with the Cardinals, with nine postseason wins, breaking the all-time Cardinals’ record of seven, which was held by Bob Gibson. In three World Series games, he went 3-0 with a 2.00 ERA.