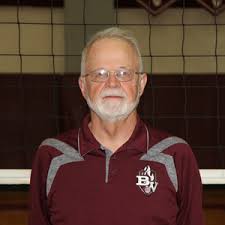 When Charlie Rodman, a graduate of Du Quoin Township High School and SIU-C was hired to teach English at Belleville West High School, coaching athletics, much less volleyball, wasn’t even on the radar. In an English Department that included Chuck Hasenstab and Roger Mueller, Belleville West coaching legends and Hall of Fame members in their respective sports, perhaps coaching was inevitable.

In 1977, when the IHSA moved volleyball from a winter sport to a fall sport, Coach Larry Betz, who had led the Maroons to a 4th place finish at state in 1976, opted to coach football in the fall, Principal Jerry Turner was left with few options.  He hired the” ill-qualified” Charlie Rodman, whose sole volleyball experience was a quarter of P.E. volleyball at SIU, to be the coach of the Maroons.  Little did he know that 42 years later, Rodman would still be coaching.

For Rodman, the first years were both challenging and exciting.  He had to learn on the job  so he read, went to camps and clinics, and he listened to and watched experienced coaches. His hard work and the commitment of the assistant coaches and Maroon athletes paid off. From 1977 to 1989 the volleyball team made it to state 5 times but could not medal against the powerful Chicago teams who dominated the sport in the large school category.

Coach Rodman created a plan. His teams needed to compete against those powerful Chicago teams during the regular season. The Belleville West administration endorsed this plan and allowed his teams to travel.He also created the first club volleyball team in Southern Illinois so that his players could play year-round. He encouraged players that could earn a college scholarship through volleyball to join a St. Louis club so that they would benefit even more from the tougher competition.

His plan worked. The 1990 and 1991 seasons were different. Led by Marnie Triefenbach, later to be named the co-national player of the year and University of Indiana recruit Lynn Crawley, the 1990 Maroons defeated perennial power Mother MacAuley in the semis and Lockport in the championship match.

The 1991 season yielded a second state championship. Mizuno ranked the Maroons as the # 2 high school volleyball team in the nation. Coach Rodman was named the Illinois Girls Association Coach of the Year for 1990-1991. The remainder of Coach Rodman’s career included 7 more trips to state, culminating in a 3rd place finish his last year as head coach at Belleville West. His high school career record was 814-163-2.

After his retirement in 2004, Rodman went on to be an assistant coach at Washington University. During his time there, the Bears won the NCAA Division 3 National Championship in 2007 and 2009. In 2010, Coach Rodman was named NCAA Division 3 Assistant Coach of the Year.

“Teaching and coaching have a lot in common,” Rodman says, “but it all boils down to the people. We share, we learn, we fail, we succeed, and we create memories and experiences that help shape our lives. It is hard to think of a better way to spend time than coaching volleyball.”

Marnie Triefenbach, Stanford University All-American, sums it up best what it was like to play for Coach Rodman. “He created a culture of effort, fun, and learning. He loved his teams and wanted to create more than volleyball players. His most important messages were about passion, loyalty, and being a good teammate. He made us believe that we could run through walls. I still believe I can!”