Carl Mauck, a native of McLeansboro, Ill., attended Southern Illinois University before beginning a courtship of some 34 years with the National Football League. Mauck played center for 13 seasons in the NFL. He later used his knowledge as an offensive line coach with a variety of teams.

Most of Mauck’s NFL playing career was with Houston and San Diego. He later became the Chargers’ offensive line coach, directing San Diego’s line from 1992–95, during which the Chargers were in the playoffs three of those seasons, including Super Bowl XXIX. 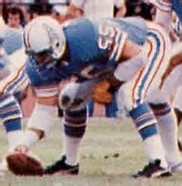 As a player, Mauck’s career spanned 13 seasons from 1969–1981. He played in 166 career regular-season games, including a stretch of 156 in a row. He also played in eight career playoff games, including back-to-back AFC Championship Games for the Houston Oilers in 1978 and ’79.

Mauck’s playing career started with the Baltimore Colts in 1969 and the Miami Dolphins in 1970. He was with the Chargers from 1971–74 before finishing his career with Houston from 1975–1981.

During that span Mauck snapped the ball to such noted quarterbacks as Johnny Unitas, Bob Griese, Ken Stabler and Dan Fouts.

Mauck recently received the the Gerald Ford Award, named for former President Ford, that honors an individual who has provided significant leadership as an advocate for intercollegiate athletics on a continuous basis over the course of their career.