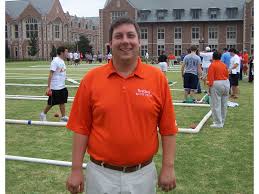 This year’s winner is Brock Guseman (pronounced Gusman). Brock has been involved with Special Olympics for the last 13 years. He was introduced to Special Olympics track and field in grade school and now, as an adult, participates in bocce, softball and basketball with his teammates at NextStep for Life in Jefferson County.

The 33-year-old Brock was selected, as the only Special Olympics athlete from the St. Louis Metro Area to attend the 2011 World Games this past June, representing Team USA in bocce. After practicing his bocce skills weekly for more than a year, Brock competed in Greece and earned a bronze medal in singles, bronze in doubles and a fourth place in team play. He played the best games of his life against players from Australia, Germany, England, China and Puerto Rico.

Through his involvement with Special Olympics, Brock says he has traveled to places and seen things that he may never have experienced without the program. He also likes meeting new friends from all over Missouri at Special Olympics tournaments.

Outside of Special Olympics, Guseman works with Feed People, a thrift store and food pantry. In his spare time, he likes to go to the movies, go out to eat and go fishing with mom and dad.