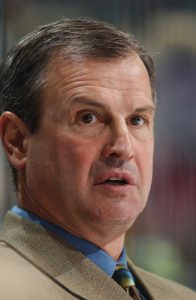 Thousands of words were written about Brian Sutter during his 12-year playing career with the St. Louis Blues. But two words summarize what he meant to the Blues: heart and soul. Sutter feared nothing and no one. His drive and determination and ability to withstand punishment while standing in front of the net were legendary. Somehow, No. 11 would fend off the nastiest of hacks and whacks by agitated opponents to bat home a rebound near the crease, or convert a feed into the slot.

When people reflect about Sutter, they go far beyond the 303 goals and the 636 points he scored, or the club record 1,786 minutes in penalties that spanned 779 games. Sutter was much more than numbers. He was about the will to win. The Blues could be down by four goals with 10 minutes to play, and while most players would subconsciously surrender and look forward to the next tilt, Sutter would be his manic, eyes-wide-open self every time he hit the ice.

“I hate to lose,” he would say while looking a reporter in the eyes after a loss. It didn’t matter what time of year – all losses were like taking a bullet. After those games, an icy stare would fill his face as media gather near his dressing stall. He agonized over defeats, but it didn’t take long to refocus on the next game.

“Brian is the kind of player who helps a coach keep his job,” Jacques Demers once said. “He’s a perfectionist on the ice. And never blames anyone else for making mistakes… but he crucifies himself if he makes one.”

Demers should know. Sutter was an integral part of his veteran core of players that help the Blues reach the Stanley Cup semifinals in 1986. They took the Calgary Flames to the seventh and deciding game of that series, which was highlighted by perhaps the greatest game in St. Louis history — the Monday Night Miracle. 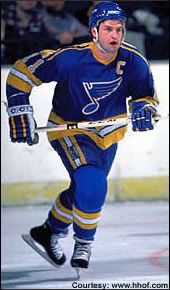 In that game, Sutter was at his grittiest, despite a serious shoulder problem. He could barely raise his arm above his neck, but that didn’t stop him from helping the Blues come back from a huge third-period deficit to tie the Flames at 5-5 and then win it before a delirious home crowd at The Arena. Doug Wickenheiser’s goal in overtime won it for the Blues, but Sutter and linemates Doug Gilmour and Greg Paslawski were in the zone during that furious third — period comeback.

One of six brothers to play in the NHL, Sutter poured his heart into every game. He was drafted in the second round by the Blues in 1976 and quickly established himself as a player to be reckoned with. Sutter was fearless, and he fought all comers. Some of his more frequent and memorable fights came against Chicago Blackhawks captain Terry Ruskowski.

But Sutter wasn’t a one — dimensional player. If he sensed the Blues needed a lift, he’d drop his gloves and go after anyone just to light a fire. Or he might risk getting mauled in front of the net to poke home one of his many “garbage goal.” Or he might savor the thrill of killing a penalty or wreaking havoc in front of the net during a Blues power play.

He didn’t fancy himself a goal-scorer, but Sutter had seasons of 41 and 46 goals in his productive career. He was a fixture on the left wing with longtime friend Bernie Federko, who in general didn’t mean a lot to Sutter. It was all about winning.

“As a player, I was miserable to be around when we lost,” he says. Sutter never got closer to winning the coveted Stanley Cup than that ’86 series against Calgary.

Shortly after hanging up his skates, Sutter was named coach of the Blues in 1988. He went on to coach at Boston, Calgary and Chicago.