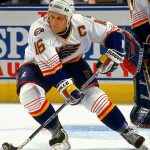 Brett Hull is a Canadian–American former ice hockey player and general manager, and currently an executive vice president of the St. Louis Blues of the National Hockey League (NHL). He played for the Calgary Flames, St. Louis Blues, Dallas Stars, Detroit Red Wings and Phoenix Coyotes between 1986 and 2005. His career total of 741 goals is the fourth highest in NHL history, and he is one of five players to score 50 goals in 50 games. He was a member of two Stanley Cup winning teams – 1999 with the Dallas Stars and 2002 with the Detroit Red Wings. In 2017 Hull was named one of the ‘100 Greatest NHL Players’ in history.

Known as one of the game’s greatest snipers, Hull was an elite scorer at all levels of the game. He played college hockey for the University of Minnesota-Duluth Bulldogs, where he scored 5

2 goals in 1985–86. He scored 50 the following year with the Moncton Golden Flames of the American Hockey League (AHL) and had five consecutive NHL seasons of at least 50 goals. His 86 goals in 1990–91 is the third-highest single-season total in NHL history, with the first two being the same person, Wayne Gretzky. Hull won the Hart Memorial Trophy and Lester B. Pearson Award that year as the league’s most valuable player. He was named a first team all-star on three occasions and played in eight NHL All-Star Games.

Having dual citizenship in Canada and the United States, Hull was eligible to play for either Canada or the United States internationally and chose to join the American National Team. He was a member of the team that won the 1996 World Cup of Hockey and was a two-time Olympian, winning a silver medal at the 2002 Winter Olympics. Hull was inducted into the Hockey Hall of Fame in 2009, joining his father Bobby. They are the first father-son combination to each score either of 600 goals or 1,000 career points in the NHL. Hull’s nickname, “the Golden Brett” is a reference to his father’s nickname of “the Golden Jet”. His jersey number 16 was retired by the St. Louis Blues in 2006.