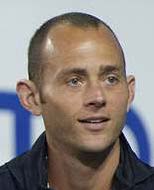 In Indescribable Fashion “The World Cup . . . is the absolute pinnacle of our sport. It is something we dream about as players.” — Jozy Altidore, U.S. 2010 and 2014 World Cup teams

Unlike Jozy Altidore, who played in his first World Cup at age 20, Brad Davis took much longer to reach “the absolute pinnacle” of soccer. On June 26, 2014, Davis started for the United States against Germany in a group stage match at Recife, Brazil. His age: 32. He played the first 58 minutes of a game won 1-0 by Germany, the eventual 2014 World Cup champion. Davis became only the ninth St. Louisan to have played in a men’s World Cup match since the start of the competition in 1930.

“To be able to stand there and sing the National Anthem representing all of my family, friends, coaches, mentors, let alone an entire nation, was a feeling and emotion that I would never be able to describe,” says Davis, a native of St. Charles. “I would never have had that opportunity without the support of all those people in my life and it was a moment that allowed me to reflect on the amount of sacrifice and work that had been put in over a lifetime.” 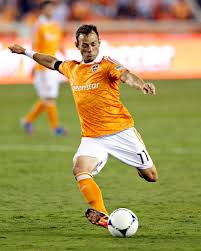 A midfielder, Davis gained the pinnacle at almost every level of soccer. As a teenager, he played on the Scott Gallagher team that won the U.S. Under-18 national title in 2000. He was a second-team All-American at St. Louis University. At the professional level, which he reached after two collegiate seasons, Davis became one of the greatest players in Major League Soccer.

He retired in 2016, his 15th MLS season, with 57 goals and the third highest number of assists (122) in league history. He played on two MLS championship teams and was a six-time MLS All-Star. Davis finished second in the 2011 MLS MVP voting.

Among his many soccer talents, his deadliest was a lethal left foot that proved particularly effective whether during the run of play or on corner kicks and free kicks. His service from the wings gifted goals to many fortunate forwards.

Davis credits his development as a player to “a ton of help over the years from many coaches. I was never the biggest, fasted or strongest kid. However, my technical ability and my ability to read and understand the game was something I truly developed under Tom Howe with Scott Gallagher and Mike Gauvain at Scott Gallagher and Chaminade High.”

Although living in Kansas City, Davis has returned to his roots as the technical director of Scott Gallagher’s youth soccer operations in KC. He also devotes a great deal of time combining his love of the outdoors with a cause close to his heart: helping veterans and active duty military personnel.

Davis is the CEO of Banded Brigade Outdoors, a nonprofit organization that takes veterans and active duty personnel on all-expenses-paid hunting trips and other nature activities. (See bandedbrigadeoutdoors.org for more information.)