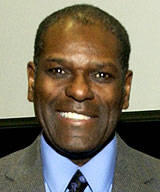 There have been few fiercer competitors, more intimidating or more dominating than Bob Gibson of the St. Louis Cardinals. His remarkable physical stamina and tremendous concentration gave him an enormous edge, enhanced by his willingness to pitch inside and sometimes hit batters. His 1968 season is one of the very best ever compiled by a pitcher, and his stellar World Series performances made him the toughest pitcher in the Fall Classic and brought him Hall of Fame election in 1981. With a blazing fastball, darting slider, wicked curve, and pinpoint control, from 1963 to 1972 Gibson averaged better than 19 wins per season. He struck out more than 200 batters nine times and led the National League four times in shutouts. In 1971 he no-hit the Pittsburgh Pirates. 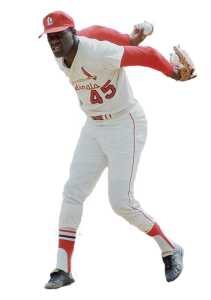 route to a record 1.12 ERA. During one stretch, Gibson allowed only two runs over 92 innings and won 15 straight games. The second area in which Gibson proved phenomenal was World Series play. He won seven consecutive games and pitched eight straight complete games in World Series competition. In the opener of the 1968 classic, Gibson beat 30-game winner Denny McLain 4-0 and set a Series record by fanning 17 Tigers. His 35 total strikeouts in the 1968 Series were also a record. He won Game Four 10-1, but lost Game Seven 4-1, on two days’ rest, to Mickey Lolich. Gibson lost a shutout in the seventh inning when Curt Flood uncharacteristically misjudged a routine fly ball. Gibson won the clinchers in both the 1964 and 1967 Series. In the 1964 Series against the Yankees, he won Game Five, 5-2, in 10 innings, taking a shutout into the ninth. Coming back on two days’ rest for Game Seven, he won 7-5. In 27 innings, he had 31 strikeouts and a 3.00 ERA. In 1967, he beat Boston’s Jose Santiago in the opener, 2-1, won Game Four, 6-0, Game Seven, 7-2.

Gibson was found to have a heart murmur when he was a child, but went on to excel in basketball and baseball in high school. He accepted a basketball scholarship to Creighton University and was the first person inducted into the school’s Sports Hall of Fame. In 1957, Gibson agreed to sign with the Cardinals for $4,000 and reported to the Omaha farm club. After the baseball season ended, he joined the Harlem Globetrotters for a season. His Omaha manager, Johnny Keane, had great confidence in him, but two trials with the Cardinals had produced a 6-11 record and not much of an impression on the manager Solly Hemus. However, when Keane replaced Hemus in 1961, he put Gibson in the starting rotation to stay. Gibson blossomed in 1963, going 18-9, as the Cardinals contended following the acquisition of fine-fielding shortstop Dick Groat. Gibson retired as the winningest pitcher in Cardinals history. He became the second pitcher in history to strike out 3,000 batters and also hurled 56 shutouts. His incredible career was accomplished despite a fractured leg (1962), a severely strained elbow (1966), a broken leg (1967), and badly torn ligaments and knee surgery (1973). After struggling through the 1975 campaign on bad legs, Gibson decided in early September that it was time to retire.

Gibson proved repeatedly there simply wasn’t an element of the game he hadn’t mastered. From 1965 to 1973 he won nine consecutive Gold Gloves for fielding excellence. He often helped his cause with the bat. He had 24 regular-season home runs, plus a pair in World Series play. In 1970, he batted .303 and was occasionally employed as a pinch-hitter.