Bob DeMarco had a 15-year career as a center in the National Football League, doing most of his big things with the St. Louis Cardinals. He went to three Pro Bowls and was named to seven All-Pro teams. In all, he played for four NFL teams, including the Cardinals, Miami Dolphins, Cleveland Browns and the Los Angeles Rams.

Born in Jersey City, NJ, and raised in Wood-Ridge, NJ , DeMarco graduated in 1956 from St. Mary’s High School, where he played both offense and defense on the school’s football team.

He transferred to the University of Dayton from Indiana University, graduating in 1961 with degrees in business management and economics. After three years playing football with Indiana and Dayton, and with one year of collegiate eligibility remaining, he was selected by the Chicago Cardinals (before they moved to St. Louis) in the 14th round of 1960 NFL Draft. 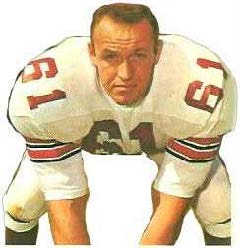 By the time he reached high school, his prowess on the football field became well known. “My sophomore year we won the state championship,” he recalls. “As a reward, they took us to see the New York Giants play the Pittsburgh Steelers at the Polo Grounds. That’s when I became hooked on professional football.”

He received a scholarship to Indiana, which finished 1-8 his first season there. He transferred to Dayton, where he played two seasons and was elected captain his senior season.

He played in the Blue-Gray and Senior Bowl in 1960 and was selected to the Kodak All-American Team at the end of the ’60 season.

After being drafted by the Cardinals, DeMarco spent training camp with fellow rookies Ernie McMillan, Charlie Johnson, Pat Fisher, Roland McDole and Taz Anderson … “rookies who wound up playing a total of 85 years in the NFL. That could be some kind of record,” he said.

DeMarco was moved to center the following year. “We had the best offensive line in the NFL those years. Bob Reynolds, Irv Goode, Ken Gray and Ernie McMillan. “We should have won 2 or 3 championships then,” he insisted.

He was traded to Miami, and was involved in the longest playoff game in history, when the Dolphins beat Kansas City well into the second overtime period.

In all, DeMarco played in the ’72 Super Bowl and seven playoff games. “All in all, playing in the NFL was a great ride,” he says. “I made lifelong friends and got to play with and against some of the greats in NFL history.”