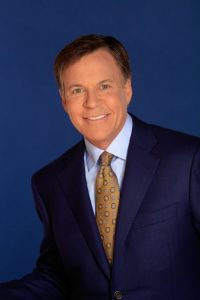 He came to St. Louis as young and brash as the team he was broadcasting for on KMOX radio, But it was his talent that carried him to bigger and better assignments and saw him evolve into one of the most sought-after broadcasters in sports television.

“Young Bobby Costas,” was what the late KMOX broadcaster Jack Carney nicknamed him when Costas first came to the station as a 22-year-old just out of Syracuse University. His broadcasting career there began by doing play-by-play for the old Spirits of St. Louis and Missouri basketball. Since then, Costas has won 24 Emmy Awards, including 14 Emmy Awards as Outstanding Sports Personality/Host. His latest Emmy came last month at the News and Documentary Emmy Awards for his remarkable “Sandusky Speaks” interview interview with convicted former Penn State assistant coach Jerry Sandusky on NBC.

Costas is the most honored studio host in the history of television sports and is the only person ever to have won Emmy’s in news, sports, and entertainment.

Costas is a native of New York, but St. Louisans adopted Bob as their own son a long time ago. Despite his national and international acclaim, he is a humble man appreciative of his opportunities. Bob has given back in a big way as the primary spokesman for SSM Cardinal Glennon Children’s Medical Center where a wing was dedicated in his name. When in town, you can find Bob visiting the children at the hospital.

Costas originated the popular “Costas Coast-to-Coast” nationally syndicated Sunday night sports radio talk and interview show, which ran from 1986 to 1996. From August 1988 through January 1994, he hosted his own Emmy Award-winning late-night interview television show, “Later with Bob Costas,” on NBC.

In 1994, Costas expanded his broadcasting duties at NBC. He contributed segments to a variety of NBC News programs, including the primetime newsmagazine, special interviews for NBC News’ “Today” show.

From 1984-92, Costas hosted NBC’s NFL pregame show, “NFL on NBC.” In 1996, he returned to the NFL pre-game, contributing commentaries and interviews.

He also hosted the pre-game shows for Super Bowls XX, XXIII and XXVII and won Emmys for writing in 1988 and 1995. The latter award was for his moving tribute to the late Mickey Mantle (who was Costas’ favorite player growing up) on “NBC Nightly News.” He also has written two books – Fair Ball: A Fan’s Case for Baseball and St. Louis: For the Record. 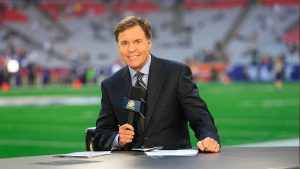 In April 2000, Costas’ “Fair Ball” received excellent reviews and made the New York Times Best Seller list. Net proceeds from the book were donated to Baseball Assistance Team (B.A.T), which provides financial assistance to those members of the baseball family in need.

In addition to his 22 Sports Emmy Awards and the News Emmy for his Sandusky interiew, Costas’ interview program, “Later with Bob Costas,” won the 1993 Emmy Award for Outstanding Informational Series.

Costas actually began his broadcasting career in 1974 at WSYR-TV and Radio in Syracuse, N.Y. He then joined KMOX, working as play-by-play voice of the ABA Spirits. He also called play-by-play for one season of Chicago Bulls road-game telecasts. From there he went on to handle regional NFL and NBA assignments for CBS Sports, while also acting as the radio voice of University of Missouri basketball from 1976 to 1981.

One of television’s most gifted interviewers, Costas won acclaim as host of HBO’s “On The Record,” a weekly show on which Costas interviewed luminaries from the worlds of sports, entertainment and politics. He recently began hosting “CostasNOW,” on HBO, a quarterly one-hour sports magazine program. Costas has also hosted HBO’s “Inside the NFL” since 2002.

Costas’ wit and intelligence have made him a popular guest on talk shows circuit – from his memorable play-by-play call of elevator races on “Late Night with David Letterman” to his current appearances on “The Tonight Show with Jay Leno,” and “Late Night with Conan O’Brien” and many others.