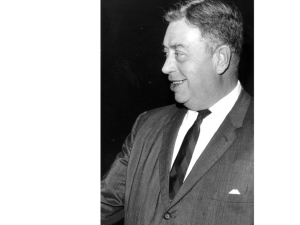 Bob Burnes, known as “The Benchwarmer,” wrote for the St. Louis Globe-Democrat for 51 years and also the very first host of the long-running Open Line program on KMOX Radio.

From his hiring in 1945 to his retirement in 1986, Burnes wrote more than 15,000 articles, eventually becoming the long-time Globe’s sports editor. His near-photographic memory of games he had covered served him well later when he premiered on KMOX in 1953 on the Sports Open Line program. Burnes’ undoubted support for St. Louis led to his popularity among his fans and to many awards being named in his honor, including the Gateway Chapter of the National Multiple Sclerosis Society, which created the “Bob Burnes Spirit of St. Louis Award,” given regularly to the person who has dedicated years of service toward excellence and the celebration of sports in St. Louis.

Burnes was also one of the original members of the St. Louis Soccer Hall of Fame. When he passed away, the executive board chose to create an award in his honor, which is presented every year at the annual Soccer Hall of Fame banquet to someone who has shown outstanding support for the sport of soccer in the St. Louis area whether it be as a player, coach or administrator.

Robert Liston Burnes was born on July 14, 1914, graduated from CBC High School and then St. Louis University. He began writing for The Globe-Democrat as a sports writer on August 27, 1935, was appointed sports editor on February 2, 1943, and was named executive sports editor in January, 1966. He continued writing his column, “The Benchwarmer,” which he started writing in 1946, under new management until the newspaper closed in October 1986 – a 40-year run. He was the first host of the KMOX Open-Line sports program from 1953 to 1992. 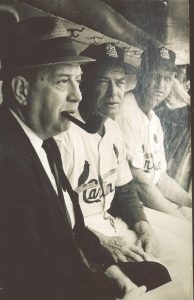 In his final column (the first time the Globe closed) in 1984, he wrote: “It has been fun; it has been the greatest experience of my life. If in some small way it has brightened a day, added a word of explanation, espoused a cause or exposed a fraud, I have had ample reward.”

He continued his column when the Globe re-opened under new ownership until the newspaper’s final demise in 1986. Burnes was a man of impeccable energy, churning out his column on an old manual typewriter at home, stuffing the copy in his pocket, heading to the office and entering it into the computer to be printed. But he always took time to visit with members of the staff before rushing off to a speaking engagement, radio station, or a meeting with one of the many organizations gathering to raise funds for the less fortunate.

Burnes had several heartbreaks through the years: the death of his father, Brian P. Burnes in a robbery in 1959, the closing of the Globe-Democrat in 1986, and his dismissal by KMOX in 1992. But the one tragedy he never recovered from was the loss of his daughter, Cathie, who died of an aneurysm. Cathie followed her Dad as a budding sportswriter for the St. Louis Post-Dispatch. But Bob never wavered. He took the time to recognize the many friends, present and former co-workers who had shown so much support for he and his wife, Adele, in their time of sorrow.

He was the author of two books, “Fifty Golden Years of Sports” in 1950 and the “Big Red, The Story of the Football Cardinals” in 1975. He contributed articles for such chronicles as The Sporting News, Baseball Digest, Sport Magazine, The St. Louis Review and even The Saturday Evening Post. He served on the President’s Council of St. Louis University, was a 50-year member of the Baseball Writers Association of America, elected to the Missouri Sports Hall of Fame, was a charter member of the sports-affiliated 1-2-3 Club, and a long-time member of the organization closest to his heart – the St. Louis Soccer Hall of Fame (formerly the Old Time Soccer Hall of Fame) – in which he was a charter member and director since its formation in 1971.