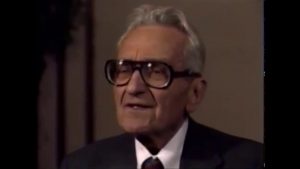 The story of the St. Louis Hawks and the club’s Cinderella climb to the summit as one of the sports world’s finest franchises revolves around Ben Kerner and his grim determination to make a go of a situation that has been described countless times as virtually hopeless.

The tale of Kerner and his Hawks started back in his home town of Buffalo, New York. A Canisius College and University of Buffalo alumnus, he founded a profitable sports advertising and promotion firm in the early ’40’s. A business associate, Leo Ferris, had acquired a franchise in the old National League. Seldom has a man worked as hard as Kerner did the next 10 years. The road led from Buffalo to the Tri-Cities in Illinois, to Iowa, and to Milwaukee.

After visiting several other cities, Kerner decided to move the team to St. Louis despite the pleas of sports officials and newspapermen throughout the country who pointed out to Ben that St. Louis had already lost their pro basketball team, the Bombers, the Flyers and the baseball Browns. The rest is history. Kerner’s whole life became basketball. T 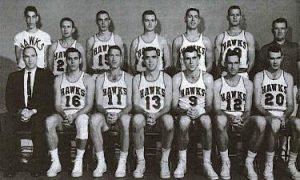 ogether Ben and General Manager Marty Blake became the most savvy traders of players in the game.

Beginning in the 1956-57 season, the Hawks won five Western Division titles, played in four NBA Finals and beat the Boston Celtics to win the 1957-58 NBA World Championship. The greatest move Kerner ever made was to draft Bob Pettit who joined the last place Milwaukee team the year before moving to St. Louis. Pettit became the greatest Hawk in history and one of the greatest forwards of all-time.

He also traded for future Hall of Famers Cliff Hagan, Ed Macauley, Slater Martin and Clyde Lovellette and employed Hall of Fame coaches Red Holzman, Harry Gallatin, Alex Hannum and briefly Andy Phillips.  Kerner’s marketing skills were his trademark. The team spent the summer going around St. Louis and surrounding towns in a “Hawks” painted van to school yards and gyms giving clinics to kids. He had special nights bringing in post game concerts like the Glenn Miller Orchestra and others.

With his finances vastly improved, Ben realized new seats and a better floor arrangement were needed at Kiel. He advanced the City of St. Louis $35,000 so that the new setup could be installed immediately. Then he purchased a $2500 scoreboard. In 1960 he had special baskets designed which operated on a hydraulic lift, could be installed and moved out quicker than any ever produced to that time and they were the first anywhere in the world. Then he advanced the City money to purchase a new wood floor for both Kiel and The Arena.

A pioneer in the field of radio-TV programming, the Hawks always had the most lavish coverage in the NBA. All of the club’s games were broadcast live. He instituted the NBA Game of the Week. He bargained for having the NBA All-Star Game in St. Louis three times in a 10-year span.  Ben Kerner’s Hawks, whose stories were told through the colorful, golden voice of broadcaster Buddy Blattner, were the darlings of St. Louis fans for 13 seasons earning 12 playoff appearances. The Hawks played in front of all sellout crowds Kiel for most of those seasons.