When Belleville West ruled the Illinois boys prep golf world in the late 1960s and early 1970s, the Maroons usually left their opponents “marooned”, whether it was in a patch of rough or on an unforgiving water hole. West snared Illinois High School Association championships in 1969, 1971 and 1973 at Champaign. The Maroons also finished second in 1970 and fifth in 1972, so that five-year run proved memorable.

“It was fun and winning was a lot of fun,” said then-Maroons head coach Dave Shannahan, also a St. Louis Hall of Fame Metro Legends Award recipient for basketball in 2018. “We dominated and that success meant a lot to me.”
And it meant plenty to the players.

Take it from Rusty Pierce, a member of the 1969 and 1971 squads. Pierce then went on to play collegiate golf at Southern Illinois University Edwardsville. “I have a lot of fond memories and it was unbelievable that we won state twice when I was in high school,” he said. “We had a parade through Belleville and we got the keys to the city.”
Shannahan said the Maroons deserved everything they received. A strong work ethic, coupled with a touch of camaraderie, made it possible.

Bob Davis and Kevin Littlefield also played for the 1969 team that shot a winning score of 628. Les Agne, Dan Killingsworth and Bud Bott also were key members of the 1973 unit that fired a top score of 619. The talented 1971 team, which featured Haas, Alberts, Phillips, Pierce and Brestal, shot a sizzling state-record 600 score and finished 10 strokes ahead of runner-up Quincy. “That team was the best one,” said Shannahan, who served seven years as the Maroons’ golf coach. “It had the most talent and played convincingly.” 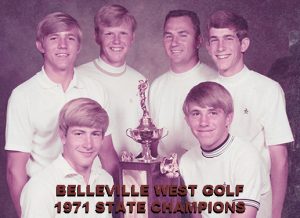 Haas, a future pro golfer and PGA legend, led the way for the first two state championship teams and nearly directed Belleville West to an Illinois title in 1972. The senior shot a then-record 140 score for individual state honors, but the Maroons finished fifth. In 1970, West finished second to Homewood-Flossmoor. “We were very young in 1969 because we played a senior, junior, two sophomores and a freshman,” Shannahan said. “The 1973 team was a little better than the 1969 one because we were more experienced.”

The 1973 team continued the Maroons incredible run of winning major tournaments. They secured their 11th Southwestern Conference championship that spring, earned their 12th successive district title and snagged their third straight sectional crown. “We had a lot of good players,” Shannahan said of his tenure as head coach, “and we never lost a district, conference or sectional championship in those seven years.”

Pierce said the Maroons remained motivated during that era because they took a cue from pro golfer Bob Goalby, the pride of Belleville. “The whole (success) thing started after Bob Goalby won the Masters championship,” Pierce said of his 1968 title. “We all started to get interested in playing golf. The 1968 team wasn’t very good. We didn’t qualify for state. But we were much better in 1969 and we won several tournaments.”

No doubt, it helped that Haas came aboard in 1969 and accelerated the Maroons’ success. “Jay was an elite player,” Pierce said. Yet it took a quality team of talent to accomplish their goals. “We were all competitive, but we all got along well,” Pierce said.