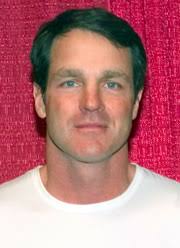 Andy Van Slyke could have been called a prototype of the Cardinals’ “Whiteyball’ era. He could run and play defense with the best of them.

Van Slyke was an All-American performer as a senior at New Hartford Central High school in New Hartford, NY. He was a first-round draft choice (sixth overall) of the Cardinals in the 1979 MLB amateur draft. His arm strength and ability to run helped manager Whitey Herzog’s running Redbirds capture the 1985 World Series championship.

Whitey saw Van Slyke’s potential in his very first game after being called up from the AAA Louisville Redbirds. He made his Major League debut with the Cardinals in June 1983. The right fielder collected a double and a run batted in during the game and his career took off.

The first two years of his career Van Slyke played first base, third base and all three outfield positions. He mostly played right field the next two years on the strength of his throwing arm, occasionally p 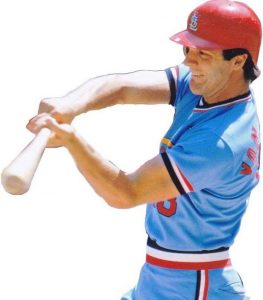 During spring training 1987, he was traded to the Pittsburgh Pirates along with catcher Mike LaValliere and minor league pitcher Mike Dunne for catcher Tony Peña. The trade occurred on April 1, and Van Slyke initially thought it was an April Fools’ Day joke.

In Pittsburgh, he mostly played center field alongside stars Barry Bonds and Bobby Bonilla. Once Van Slyke became a full-time outfielder, he showed off one of the most accurate and powerful throwing arms in the majors, so much that the “Slyke Zone” was established at Three Rivers Stadium. From 1985 to 1994, he was among the
league leaders in outfield assists. From 1985 to 1988, he posted seasons of 13, 10, 11, and 12 assists, respectively. As a center fielder for the Pirates, he won five consecutive Gold Gloves from 1988 to 1992.

Prior to the 2006 season, Van Slyke was named first base coach for the Detroit Tigers by manager Jim Leyland. Van Slyke served in that capacity for four years through the 2009 season. When Lloyd Mc-Clendon was named
the Seattle Mariners’ manager prior to the 2014 season, Van Slyke was hired to be the team’s first base coach, he also worked as the assistant hitting coach and outfield instructor through the 2015 season.