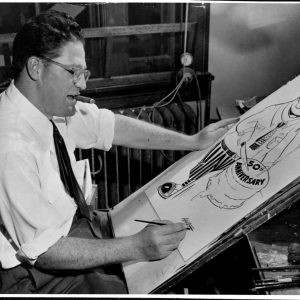 He was known professionally as just “Amadee” as he signed his cartoons that way. He was a long-time sports cartoonist for the St. Louis Post-Dispatch, in an era when newspaper sports pages usually featured a prominent cartoon as an essential element of their layout. He drew the Weatherbird cartoon for almost 50 years.

Amadee starting working at the St. Louis Post-Dispatch when he was 14 years old as a copy boy. At age 17, he moved into the paper’s art department. Wohlschlaeger took over as the artist for the Weatherbird in 1932, the Weatherbird has continued in the daily newspaper since 1901. Wohlschlaeger drew his first sports cartoon in 1936. Among his contributions was his “Cardinals Camp Capers” cartoon, sent in from spring training every year.