Albert Pujols is being recognized for his service to people with Down Syndrome and impoverished people in his native Dominican Republic by the United States Sports Academy’s awarding him the 2010 Jackie Robinson Humanitarian Award. Jack Scharr, the Aca 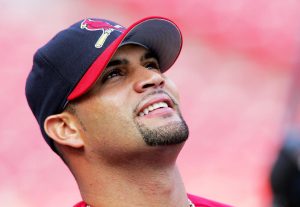 demy’s Board of Trustees Chairman of the American Sport Art Museum and Archives (ASAMA), presented the award during the St. Louis Sports Hall of Fame enshrinement ceremony.

Pujols’ accomplishments in baseball are well known. He is a three-time National League Most Valuable Player and a two-time Major League Baseball Player of the Year. He and his wife, Deidra, have a daughter with Down Syndrome. They formed the Pujols Family Foundation five years ago to benefit people with Down Syndrome, disabilities, and/or life-threatening illnesses, as well as children and families living in impoverished conditions in the Dominican Republic. Raising a child with Down Syndrome has given the Pujols family an understanding of what families in the same situation want and need an 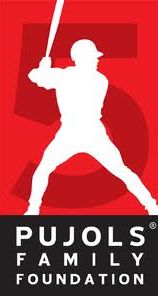 d the foundation supports a variety of programs to help meet these needs.

Representatives of the foundation went on a fact-finding mission to Batey in February to launch the Batey Baseball and “Nest” initiative. Nest is an organization that provides micro-business loans to women in developing countries so they can create vocational skills and make products for the U.S. market.

The Jackie Robinson Humanitarian Award is part of the Academy’s Awards of Sport program, honoring “the artist and the athlete.” It is presented to an individual who best demonstrates a concern for mankind. This individual should exhibit the qualities of dedication, grace under pressure, personal sacrifice, compassion, hope and dignity that characterize the promotion of human welfare and social reform. Recent winners include 2007 Heisman Trophy winner Tim Tebow, New York Jets running back LaDanian Tomlinson and pro golfing legend Tiger Woods.

The United States Sports Academy is an independent, non-profit, accredited, special mission sports university created to serve the nation and world with programs in instruction, research, and service. The role of the Academy is to prepare men and women for careers in the profession of sports. For more information about the Academy, call 251-626-3303 or visit www.ussa.edu.