Al MacInnis never imagined that shooting pucks at a beat up piece of plywood would one day lead him to the Hockey Hall of Fame. But it did.

With not much else to do in Cape Breton Island, MacInnis would often help his father take care of a nearby ice rink in town. At night, the two of them would clean up, shut off the lights and lock the doors until morning. While his dad went through the nightly routine, MacInnis would walk around the rink’s parameter, picking up pucks that sailed over the glass. Each time he visited the rink with his father, he took home a few more. By the end of hockey season, he had amassed nearly a hundred pucks with which he could practice his shot. As spring came, the weather warmed up and the ice rink closed down. MacInnis spent hours each day standing near his family’s barn, shooting pucks at a sheet of plywood that by the end of the summer had taken quite a beating.

“That’s some of the stuff you reflect on when you’re thinking about the Hockey Hall of Fame and how fortunate you are. There were times where there were blisters on my hands where I couldn’t hold a stick the next day,” MacInnis said. “I was just doing it to pass time. Never did I think it would end up getting me into the Hall of Fame.” 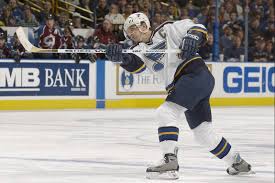 MacInnis’ career spanned 23 NHL seasons, 12 All-Star games and concluded on April 9, 2006, when the Blues retired his No. 2 to the Scottrade Center rafters. A first round selection of the Flames in 1981, the 15-time All-Star was most famous for having the hardest shot in the NHL. He was named the Conn Smythe Trophy winner as playoff most valuable player in 1989 as he helped lead the Flames to a Stanley Cup championship and won the James Norris Memorial Trophy in 1999 as the top defenseman in the league while a member of the Blues.

MacInnis won two Ontario Hockey League (OHL) championships as a junior with the Kitchener Rangers, as well as the Memorial Cup national championship in 1982. Internationally, he was an all-star on defense as Canada won the 1991 Canada Cup, twice participated in the Winter Olympics. He was a member of the 2002 team that won Canada’s first gold medal in 50 years.

One of the few defensemen to record over 1000 career points, MacInnis retired from the NHL on September 9, 2005, after missing nearly two seasons. The 2004–05 NHL lockout, which canceled the entire season, and, an eye injury were the key factors in his decision to retire. His last game was just three games into the season when he realized he was having vision problems again. It turned out that he had suffered a detached retina to the same eye that was injured in January 2001. The previous injury had left him with a permanent blind spot and a need to wear a special contact lens. His No. 2 jersey was retired by the Blues on Sunday, April 9, 2006.

Throughout his career, MacInnis was known most for his powerful slap shot. In the 1999–00 NHL Skills Competition he captured “Hardest Shot” honors for the fourth consecutive year and, overall, has seven such honors to his credit.