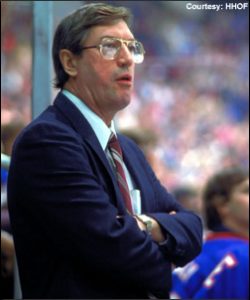 In a rather unique induction into the St. Louis Sports Hall of Fame, former St. Louis Blues player and coach Al Arbour was enshrined on Tuesday, June 9, 2015 via a conference call to his home in Sarasota, Florida. Arbour, who helped lead the expansion Blues to three straight Stanley Cup finals before becoming one of the greatest head coaches in National Hockey League history, suffered from dementia and his wife, Claire, accepted the Hall of Fame plaque on his behalf. Arbour, who died last month at the age of 84, played on four Stanley Cup championship teams before playing for and coaching the Blues. His greatest success as an NHL coach was with the New York Islanders. With the Isles, Arbour won four straight Stanley Cup titles from 1980 to 1983, winning an NHL record 19-consecutive playoff series in the process.