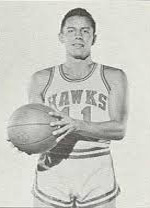 (Adapted from “Full Court: The Untold Stories of the St. Louis Hawks,” by Greg Marecek and published by Reedy Press)

He was known by several nicknames with the St. Louis Hawks – he was dubbed “Broncho,” while others referred to him simply as “Mugsy.” But Albert R. (Al) Ferrari was known as one other thing for the St Louis Hawks during his tenure in St. Louis – a true team player.

A third-round selection (17th pick) in the 1955 National Basketball Association draft by the Milwaukee Hawks, the Michigan State standout played five seasons with the team after it moved to St. Louis that same year. His career would have been longer had he not served time in the U.S. Army during the 1956-57 and 1957-58 seasons. Unfortunately, that included the team’s 1958 NBA championship campaign.

At 6-4 and 190 pounds, Ferrari played both at guard and forward. He was a standout at Brooklyn Tech in Brooklyn, NY, then went on to more great things at Michigan State University. In that first season in St. Louis, Bob Pettit was the driving force, but Ferrari had his say as well. Pettit was his usual tireless working self in the playoffs and had some big games. What did happen, however, was that a team came together with help coming from other sources –including Ferrari, who blossomed in the post-season.

Before the playoffs, Ferrari hadn’t logged many minutes of playing time. “I wasn’t playing at all and people weren’t coming to the games. (Ben) Kerner calls me into his office and says ‘I’ve got to cut your salary, you’re not scoring.’ I said, ‘Wait a second, I’m averaging a minute per game, it makes it pretty tough to score.”’ Kerner shook his head and replied, “I don’t care. I look at results. I’ve got to cut so you’re going to $400 a month (down from $5,000 per season).” “I was furious,” Ferrari said. “How could he cut a contract?

I thought that was wrong so I went to Coach (Red) Holzman and told him I’d been cut in half by Ben and I needed to start a game right now. “We were playing Ft. Wayne for two straight games. So he starts me. I told myself I’m going to shoot every time I get my hands on the ball. It’s the only chance I have to save my money. So I scored 18 points the first night and 17 points the next night and we won the two games.”

Back home in St. Louis after taking the train, Ferrari went from the station, unshaven and unchanged, directly to Kerner’s office where he demanded his original contract be restored. Kerner retorted, “Holy cow, you have two good games and you think you’re a super star.” “Still it was enough to get Kerner thinking and he decided to give me back my contract. It certainly gave me great incentive the rest of the season.”

Ferrari became the Hawks secret weapon in the playoffs. He averaged 33 minutes of playing time, was the team’s second leading scorer, averaging almost 15 points per game with 24 assists. Whenever Pettit was throttled, Ferrari would come up big, often when the game was in the balance.

Minneapolis would be the first to find out Ferrari’s worth in the division semifinals. The Lakers had a 19-point halftime lead, but Ferrari scored 16 himself in the third quarter as the Hawks rallied to win. That effort made him a fan favorite in St. Louis.

In his six-season NBA career, he played for the Hawks and the Chicago Zephyrs. He was traded by the Hawks with Shellie McMillon to the Zephers for Bill Bridges and Ralph Davis.