In 1957, the Collinsville Kahoks lost the Illinois state championship game and an undefeated season. The 1961 Kahoks were determined not to have the same fate. After edging Centralia 66-64 in the Super Sectional, the Kahoks went on to demolish its final three opponents by an average of 34 points. 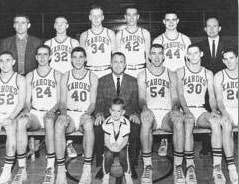 In the championship game against the Thornton Wildcats after one quarter the teams were tied 14-14. Coach Vergil Fletcher called time out and told the boys, “You know what to do! You’re just not doing it”! It was no contest the rest of the way as Collinsville out-scored Thornton 70-34 to give the Kahoks their first state championship along with an undefeated season at 32-0. The Kahoks were led in scoring by Bogie Redmon’s 32 points and Fred Riddle’s 24 points.

Collinsville was known state-wide because of its successful basketball program. In fact, on January 14 of the ’61 season, the Kahoks became the first American high school to win 1,000 games. A large reason for their success was because of Fletcher, their charismatic coach. Vergil coached the Kahoks from 1947-1976. His teams won 689 games while losing only 167. Twelve of his teams reached the state tournament series. He was renowned for his 1-2-2 Ball Press that was synonymous with Collinsville basketball. Fletcher’s coaching helped develop four high school All-Americans (Roger Bohnenstiel, Redmon, Tom Parker, Kevin Stallings) and 21 All-Staters.