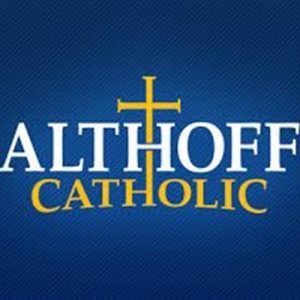 The 1980 Crusader football team showed how teamwork can push you to a new level. Althoff’s 4-4 defense only allowed 9.1 points per game while the offense averaged 25.1 points, leading to a 8-1 regular season record. The only blemish was a 14-7 overtime loss to Hazelwood East on a flea flicker pass.

After a season-opening 34-17 victory over Belleville East, the Crusaders beat Edwardsville, 15-10, in a game cancelled twice because of storms. The Crusaders won on a 46-yard Hail Mary pass from Jeff Junker to Steve Hill on the last play to run their record to 2-0.

The Crusaders went 2-1 in the next three games, defeating Granite City South, 32-12, and Belleville West, 14-3, and losing to Hazelwood East. The defense only allowed 22 and 95 yards rushing, setting the tone in the two victories.

Althoff then showed no mercy in a rematch with Edwardsville, winning 36-6 to run their record to 5-1. The 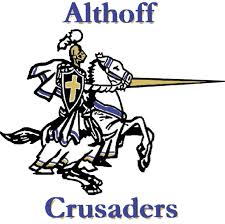 Crusaders went to 7-1 with a 21-0 victory over Granite City North, and cruising past Cahokia, 40-13. Althoff then tuned up for the playoffs with a 27-7 victory to go 8-1 with Mike Laney and Keith Chambers the first tandem to each run for 100 yards in a game that season.

Althoff opened the playoffs by snapping Mascoutah’s 22-game winning streak, sparked by Dave Maul’s 79-yard interception return, in a 24-7 win. In the quarterfinals, the defense held Champaign Central to 68 total yards in a 29-7 victory. Althoff then beat Chicago Heights Marian Catholic, 22-14, in the semifinals.

In the championship game Jim Harter blocked a punt just before the half and a 38-yard field goal by Junker made it 7-3 after 2 quarters. In the second half Laney had a 38-yard touchdown run and the defense only gave up 8 yards rushing to lead the Crusaders to the Class 4A championship.

The rest is history. Coach Glenn Schott gave each player his medal that evening at a packed assembly at Althoff leading to memories that will be remembered forever at gatherings and class reunions.