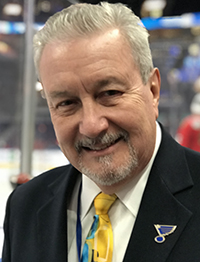 Tom Calhoun was born in Belleville and attended public schools there graduating from Belleville West high school in 1968. As a youth, he enjoyed sports…particularly baseball and was named a Khoury League all-star shortstop in 1959. The All-Star game was played at Busch Stadium One where in his lone at bat he managed what his dad called a “loud foul ball”. That, to this day, is his greatest accomplishment as an athlete.

Tom’s career behind the microphone started after being part of a high-school “Youth Sunday” sermon at church, when a little old lady told him…”Young man, you have a fine speaking voice. You should think about going into radio.”  That planted the seed. Tom’s boyhood hero was Stan Musial. And when he heard Jack Buck say on a Cardinals’ broadcast that calling a game on the radio was the “best job in the world”, he found another hero in Buck, and decided to pursue sports broadcasting as a career.

His education took him to SIU-Edwardsville where he received a Bachelor’s degree in Mass Communication which included an internship at KMOX and a chance to meet and work alongside Mr. Buck.

His professional career started at WIBV radio in Belleville in 1973. There he hosted programs and did play-by-play on high school and college sports. In the 80’s, opportunity took him to several St. Louis stations including KXOK where broadcasting colleagues Ron Jacober and Dan Kelly encouraged him to pursue an opening for the Public Address announcer with the St. Louis Blues. Then Blues executive Susie Mathieu hire 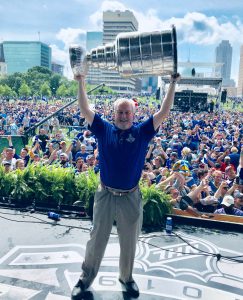 d Tom and game one with the Blues came on January 4th, 1987. As of today, (February 10th 2020) Tom has been at the microphone for every Blues game since…a total of 1511 games. He has been at the microphone for two NHL All-Star games; the one just concluded, and the one held at the Arena in 1988. Tom also worked the Alumni Classic and Winter Classic held at Busch Stadium in 2017. Of course, the 2019 Stanley Cup is a major highlight. Tom was part of the post-parade Cup celebration under the Gateway Arch where he was able to hoist the Stanley Cup overhead in front of nearly a half-million Blues fans. And yes, Tom does have a championship ring, thanks to the generosity of Chairman Tom Stillman, CEO Chris Zimmerman and the Blues ownership group.

In the summer months, Tom handles the baseball PA duties for the Gateway Grizzlies of the Frontier League. He has been a part of Grizzlies games since 2003 when the team won its first league championship. Tom would like to thank owner Rich Sauget and GM Steve Gomric for their continued support.

Tom continued to work in radio as a news announcer, sports announcer and host of general interest programming at KMOX and KTRS through the 90’s and into the early part of the 21st Century.

In 2013 Tom earned a Masters degree in communication and is currently teaching as an adjunct communications professor at Southwestern Illinois College. He is heard on regional and national commercials as a free-lance voice actor with the St. Louis-based Talent Plus agency. Tom is a SAG-AFTRA cardholder and former member of its St. Louis chapter Board of Directors. Tom and wife Barb, who met at WIBV radio in the 70’s, have been happily married for 42 years and live in Millstadt. Son Ian works and lives in Vail, Colorado. Son Stewart enjoys life in San Diego California.