Who could ever forget Terry Metcalf’s electrifying five NFL seasons with the St. Louis Football Cardinals as one of the most versatile running backs in the league?

In the 14-game 1975 season, Metcalf set a then-NFL record for combined yards with 2,462. This feat has since been eclipsed during the 16-game era (instituted in 1978), with Lionel James of the San Diego Chargers being the first to do so in 1985. James’ Big Red head coach was Don Coryell, who also coached Metcalf during his record-setting season. He also became the first player in NFL history to average at least 30 yards per kick return and 10 yards per punt return in the same season. Joshua Cribbs of the Cleveland Browns became the second in 2007. 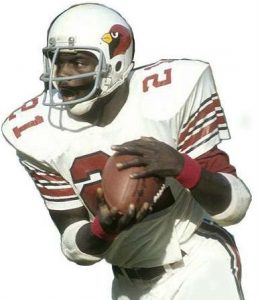 In 1978, he rushed 169 times for 669 yards, and caught 31 passes. In 1979, he carried the ball 141 times for 691 yards and caught 55 passes, and in his final year, 1980, he rushed for 540 yards and caught 51 passes.Metcalf – teaming with quarterback Jim Hart, wide receiver Mel Gray, fullback Jim Otis, receiver Ike Harris and Hall of Fame tight end Jackie Smith – gave the Cardinals one of the top skill position units in the NFL in the mid-1970s … led by the explosiveness of Metcalf.

Though only 5-foot-10 and 180 pounds, Metcalf was one of the most exciting players in the NFL during his five years with the Cardinals. Selected in the third round of the 1973 NFL draft out of Long Beach State, Metcalf immediately became a threat as a runner, receiver and kick returner.

As a rookie, Metcalf rushed for 628 yards and caught 37 passes for 316 additional yards, but was rarely used as a kick returner. However, the next season Coryell unleashed Metcalf in all phases of the game and he proved to be unstoppable.

The next season he led the NFL with a total of 2,439 all-purpose yards that still ranks as the 11th highest single season total in NFL history. He rushed for a career-high 816 yards while earning his second Pro Bowl trip and helping the Cardinals to an 11-3 record and NFC East title.

After being limited to only 1,438 all-purpose yards in 1976, Metcalf rebounded with his third Pro Bowl season in 1977 as he rushed for 739 yards and topped the 2,000 all-purpose yard mark for the third time.