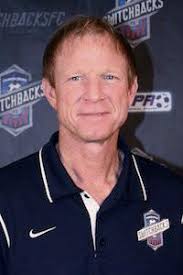 Steve Trittschuh was born and raised in Granite City, IL. where he attended Granite City North High School. At North, he earned All-State honors both his junior and senior years.

He was a Parade Magazine All-American as a senior and was heavily recruited, eventually selecting Southern Illinois University in Edwardsville. While there, Steve played four years for the Cougars, scoring 12 goals and assisting 11 others. He earned second-team All-American honors his junior year and first team his senior year. Steve was a 2011 inductee into the SIUE Athletic Hall of Fame.

Steve was selected in the second round of the MISL draft in 1987 by the St. Louis Steamers. He was only able to play one season for the Steamers as they folded the team that the same year. The following year, he played for the Tampa Bay Rowdies of the American Professional Soccer League (APSL).

The summer of 1987, Trittschuh played for the U.S. national team in the 1988 Summer Olympics. He was one of only fourteen players signed by the U.S. Soccer Federation to play for that team. When not playing for the national team, Steve played for the amateur Busch Seniors of St. Louis. 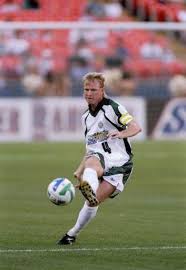 In 1990, he was a member of the U.S. national team at the FIFA World Cup and played the full 90 minutes in their opening game against Czechoslovakia. The U.S. team lost the game but Trittschuh played so well that the coach of Sparta Prague, a soccer powerhouse, offered him a contract which he accepted. He played only one season for the team, but he helped them win their league championship. He became the first American player to play in the European Cup.

Trittschuh returned to the Rowdies for two seasons before moving on to the Fort Lauderdale Strikers of the APSL. In November of 1994, he signed with the St. Louis Ambush of the National Professional Soccer League (NPSL), That year he helped the Ambush win the NPSL league championship.

In 1995, Steve moved on to the Montreal Impact of the APSL. The same year, a new U.S. soccer league was formed, Major League Soccer (MLS). Trittschuh bought out the remainder of his contract with the Impact for $10,000. He finished his tenure in the APSL as a five-time all-star.

In 1996, Steve joined the new Colorado Rapids of MLS. The team reached the 1997 final of MLS Cup. He played three solid seasons with the Rapids playing in the sweeper position. On June 14, 1999, The Rapids traded Trittschuh to the Tampa Bay Mutiny for whom he would play 64 regular and post-season games.

In 2001, he retired from playing and was hired to be an assistant coach with the Colorado Rapids. He held that post for four years.

In 1989, Trittschuh served as an assistant coach with the Southern Illinois University Edwardsville men’s soccer team. He was named head coach of USL’s Colorado Springs Switchbacks FC in advance of their inaugural 2015 season. He remained with the club for five years.