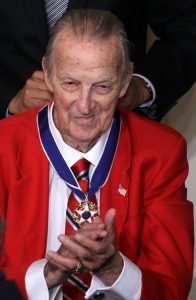 Stan Musial was born Nov. 21, 1920 in the Pittsburgh area town of Donora, Pa., which is also the birthplace of Major League Baseball players Ken Griffey Jr. and Sr. “Stan the Man,” regarded as one of the top 10 players of all time, played 22 seasons for the St. Louis Cardinals from 1941 to 1963. His father, Lukasz, was a Polish immigrant; his mother, Mary, was the daughter of Czech immigrants. Musial started his career as a pitcher, but after a shoulder injury moved to the outfield in 1940. On his 19th birthday, he married Lillian Labash, and they have four children.

Musial played 1,890 games in the outfield and 1,016 games at first base, but was primarily known for his consistent hitting. The left-handed hitter led the National League in batting average seven times and in on-base percentage, slu

Musial once said, “I consciously memorized the speed at which every pitcher in the league threw his fastball, curve, and slider; then, I’d pick up the speed of the ball in the first thirty feet of its flight and knew how it would move once it had crossed the plate.”

Former Brooklyn Dodgers pitcher Carl Erskine once humorously described his strategy of pitching to Musial: “I’ve had pretty good success with Stan by throwing him my best pitch and backing up third.” Erskine’s teammate, Preacher Roe, shared a similar sentiment. He summarized his strategy of pitching to Musial as, “I throw him four wide ones and try to pick him off at first.”

It was fans of the Dodgers who gave him his nickname. After several fine hitting performances at Ebbets Field, Brooklyn fans would see him come to bat, and say, “Uh-oh, here comes that man again. That man is back!” A sportswriter picked up on this, and Musial was known as “Stan the Man” from that point on.

Like many American baseball players of his era, Musial spent part of his career serving in World War II, missing the 1945 season to serve as a seaman first class in the United States Navy from January 1945 to March 1946.

At the time of his retirement in 1963, Musial held 17 major league, 29 National League, and nine All-Star Game records. He was elected to the Baseball Hall of Fame in his first year of eligibility in 1969. He was a fan favorite for his on-the-field and off-the-field reputation as a gentleman.

Musial played in 24 All-Star games and the Cardinals retired his uniform number 6 at the end of the 1963 season. A statue of Musial was erected outside Busch Stadium in 1968. It is inscribed with a quote from former baseball Commissioner Ford Frick: “Here stands base 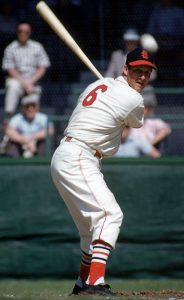 ball’s perfect warrior. Here stands baseball’s perfect knight.” The statue was unveiled the day after the Chicago Cubs had completed a three-game series sweep of the Cardinals; a few fans at the time feared that the statue might turn out to be of Ernie Banks.

At the 1962 All-Star Game, President John F. Kennedy said to Musial, “A couple of years ago they told me I was too young to be president and you were too old to be playing baseball. But we fooled them.” Musial was appointed as a national advocate for physical fitness.

Sportscaster Bob Costas praised Musial at the expense of his contemporaries: “He didn’t hit a homer in his last at-bat (like Ted Williams); he hit a single. He didn’t hit in 56 straight games. He married his high school sweetheart and stayed married to her – never married a Marilyn Monroe (like Joe DiMaggio). He didn’t play with the sheer joy and style that goes alongside Willie Mays’ name. None of those easy things are there to associate with Stan Musial. All Musial represents is more than two decades of sustained excellence and complete decency as a human being.”

Sabermetrician Bill James made a similar comment: “Musial was never colorful, never much of an interview. He makes a better statue. What he was, was a ballplayer. He didn’t spit at fans. He didn’t get into fights in nightclubs. He didn’t marry anybody famous. He hustled. You look at his career totals of doubles and triples and they’ll remind you of something that was accepted while he was active and has been largely forgotten since: Stan Musial was one player who always left the batter’s box on a dead run.”

Musial also served one year as general manager of the Cardinals. After the 1966 season, Musial succeeded Bob Howsam as G.M. He made a key trade acquiring Roger Maris from the New York Yankees for third baseman Charlie Smith. The Cardinals promptly won 101 games, the NL pennant and the 1967 World Series title. Musial then stepped down at the end of the season and was succeeded by Bing Devine.

Following his retirement, Musial has been a successful businessman and restauranteur. He remains a legendary figure in the St. Louis area. When asked why he always seemed so happy, he remarked, “If you had a .331 lifetime batting average, you’d be happy all the time, too!” In 1989, he was awarded a star on the St. Louis Walk of Fame. In 1999, Musial ranked No. 10 on The Sporting News’ list of the 100 Greatest Baseball Players. Later in the year, he was elected to the Major League Baseball All-Century Team, one of only 30 players to be so honored.